Before leaving the Wilhelmplatz it behooves us to do a little revision, i.e. where everything is. Consider this map:

The no-longer extant buildings are (in blue numbers):

The buildings lined in red are of course the two we’ve just looked at. But if you’re standing in the Wilhelmplatz some time in the 21st century you may want to know where the famous balcony was. Which balcony I hear you ask? This balcony:

The Siedler Extension (1930) onto which the balcony was built abuts the Old Reich Chancellery. Hitler told Speer to build it so he (Hitler) wouldn’t have to lean out of the window(!)

It is claimed that the balcony is lined with steel plate which would have come in handy when the balcony was later turned into a machine-gun nest (note the wooden planks (railway sleepers?) and firing slits.

But where was it? The first thing to remember is that the frontage of the buildings currently lining this section of Wilhelmstrasse, i.e. from Peking Ente to Peter-Behrens-Strasse, are set back – in my estimation – about ten metres. Proof?

Consider the period map below (from 1939) which curiously does not show the balcony. You will note the blue line  – also shown in the photo above – shows the 1939 frontage of all the buildings in this section of Wilhelmstrasse.

The green line shows my guess as to the current frontages but if you are already there you will have noticed that all of the commercial buildings and apartments are set well back from the road, so the position of the balcony would have been closer to the edge of the current footpath. Period photographs show that the Wilhelmplatz frontage of the Propaganda Ministry lines up with the edge of the Old Reich Chancellery boundary (orange line) and crowd photos show us that the balcony is some little distance from the entrance to the Ehrenhof and some slightly greater distance to the Old Reich Chancellery, so the black line indicates my educated guess. 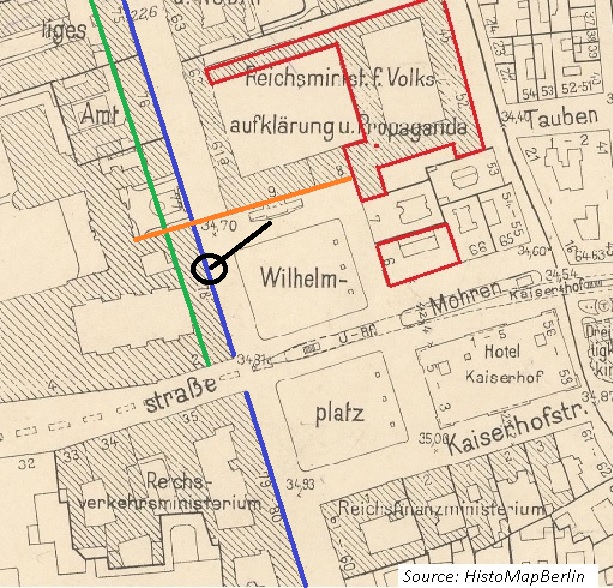 and it real terms it should be pretty much here (agreed to by some of my AHF friends, at least the less-argumentative ones):

The street directly facing us is An der Kolonnade (which did not exist pre-1945). The balcony could have been a little further to the left but not by much.

Next, off to Voss-Strasse .. but how to get there?

You are presumably still standing in Wilhelmplatz and looking forward to showing off your knowledge of the area to “friends of lesser learning” to paraphrase H.H. Munro (it’s from “The Reticence of Lady Anne” – read it, you’ll like it). The next photo (below) is not an exact Then-and-Now as I took the modern photo from outside the Czech Republic Embassy (which you will recall stands on the former Wilhelmplatz) but it’s as close as I could get. You will – if you’ve been paying attention – recognise the buildings on the left in the period photo: the Reich Transport Ministry (now the Mall of Berlin); the Borsig Palais -part of the New Reich Chancellery and headquarters of the (emasculated) SA (now the Peking Ente Chinese Restaurant); the Seidler Extrension to the Old Reich Chancellery (now a line of shops) and across the street the Ordens Palais/Propaganda Ministry (now an ugly school). The photographer in the period photo was standing outside the Reich Finance Ministry. We will turn left at the Mall of Berlin and will walk up Voss Strasse in the direction of Potsdamer Platz:

The plan is to walk up the left-hand side of Voss Strasse first, passing in order:the Reich Transport Ministry,  the only surviving period building on Voss Strasse andthe Wertheim Department store. We will then walk back down Voss Strasse, looking at the right-hand side which housed the New Reich Chancellery – after a cup of coffee at Potsdamer Platz.