If you haven’t read the previous posts and are just interested in the Propaganda Ministry, you should read Post 9: Checking Out the Neighbours as it has some information on the building and its fate. As I indicated in Post 9, it is possible to get into the building itself as there are often exhibitions or displays. It’s a sobering thought to get inside the building and realise that Dr Paul Josef Goebbels – or the Poison Dwarf if you prefer – had walked the same corridors as he planned the propaganda releases of the day  and the seduction of whichever toothsome young lady had caught his eye.

Here he is with a couple of mates at the Mooslahnerkopf lookout, Obersalzberg. From left: Josef Thorak, sculptor of monumental Nazi art, Blondi checking Thorak’s credentials, Hitler and Goebbels, unknown female: 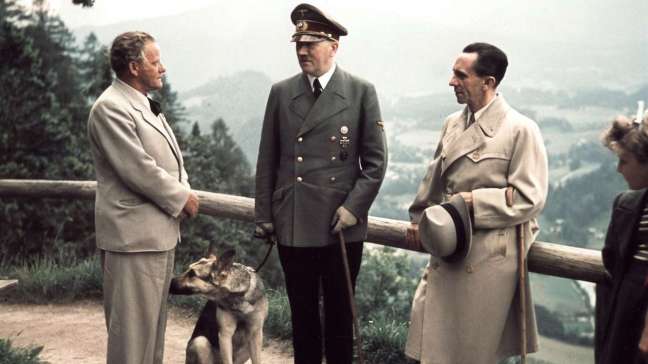 And here, in March 1945, congratulating 16 year old Willi Hubner on his award of the Iron Cross. Hubner is the same tyke whose cheek you see Hitler patting in the courtyard of the New Reich Chancellery on March 20, 1945 (see Post 29: Ceremony in the Garden): 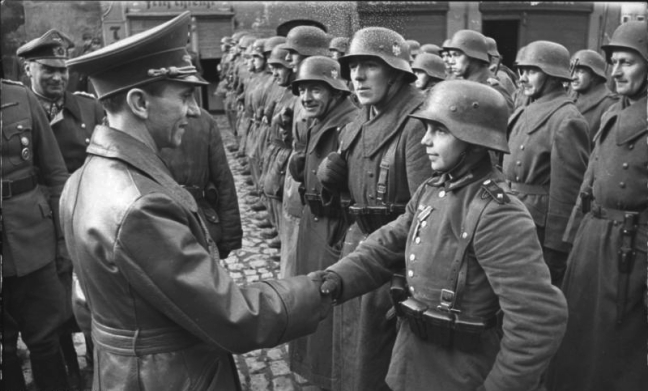 You can see the footage here and hear Willi himself describing his actions at 1:24

Here he is with his family. If you stand anywhere near the site of the Propaganda Building it’s worth remembering that all six children were killed by their parents only a matter of a couple of hundred metres away on the other side of Wilhelmstrasse, the oldest son Harald Quandt (from a previous marriage) being the only survivor as he was on duty with the Luftwaffe at war’s end. Thus eight people in this photo died somewhere behind the current site of the Peking Ente restaurant: 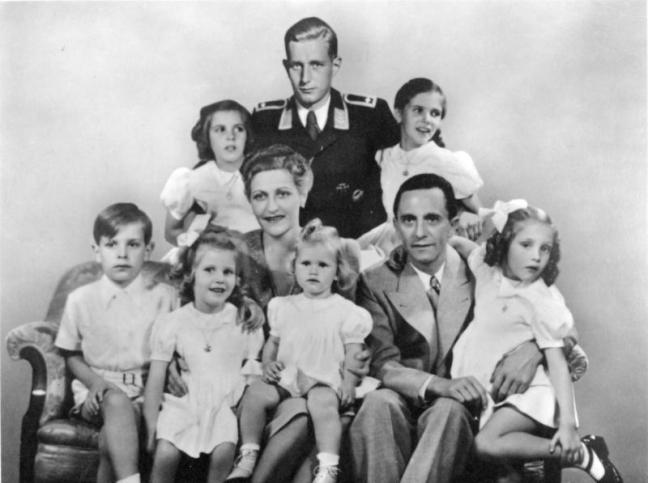 If you get into the building and want to take photographs, my advice is: don’t ask permission. I say this because I was at an exhibition and asked permission for photographs and the attendant looked nonplussed and then said NO. I got the impression that he didn’t know whether it was kosher or not but said No just to be safe.

So, to recap. That horrible school building is pretty much where the original wing of the Propaganda Ministry stood. If you walk behind it you won’t get far because the surviving wing is fenced off but you can still see it. The horrible school building is on the site of the main building of the Ministry which had started life as the Ordenspalais in the 18th century and ended life as the Ministry for Enlightenment and Propaganda. Here it is pre-war, with the camera facing the three arched entrances seen before (and which still exist facing Wilhelmstrasse). This is the bit that was demolished: 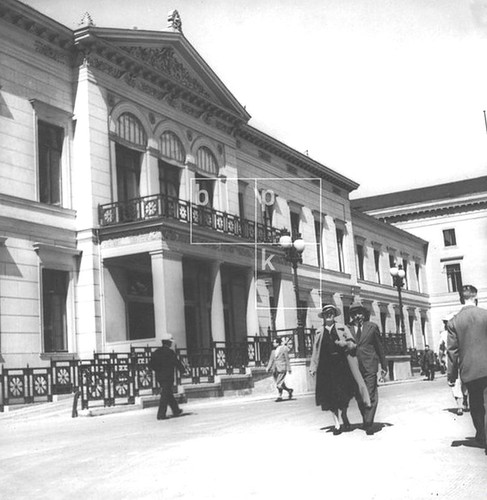 If that bloke at the extreme right (hmmm … must be a Nazi) were to move his left shoulder, you could see one of the arches. This contemporary photo shows where the original building would have been – the red line shows the frontage corresponding to the previous photo, the two blue lines roughly where the balcony would have been and the green circle is roughly where the bloke with the big left shoulder stood. 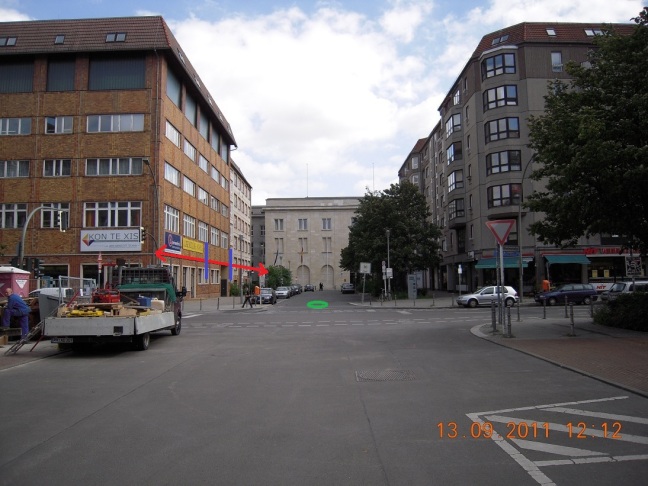 Just in case you don’t believe me: 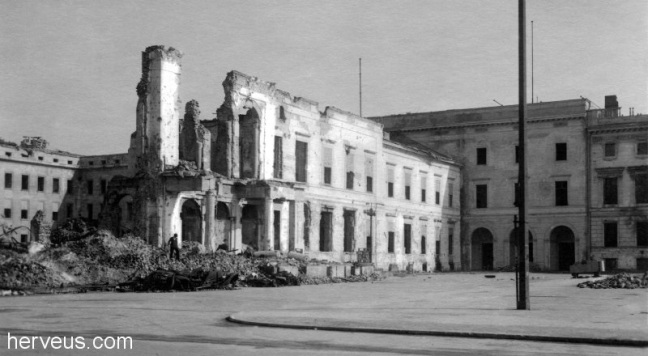 And here it is before the school building was … ummm … built, during the demolition of Hitler’s bunker. you can clearly see the remaining wing to the left: 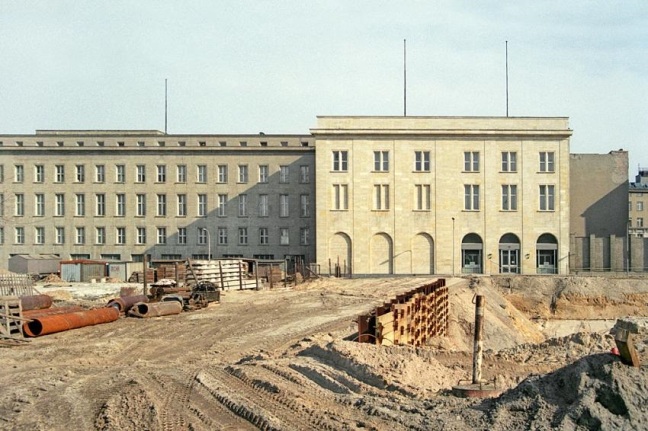 Now if you walk towards the blanked-off arches and turn left you will find yourself pretty much in the school playground/garden. Probably not a good look for an elderly gentlemen so don’t hang around and don’t wear a raincoat. Best just to trust my photos which I took after school was out. In this one you can see the surviving wing in all three photos:

And here it is from the playground: 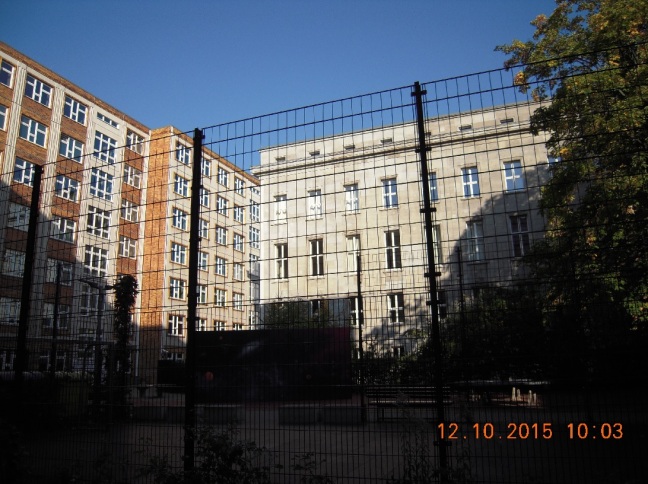 On this particular day the fencing was down so a curious chappie could sidle a little closer than usual: 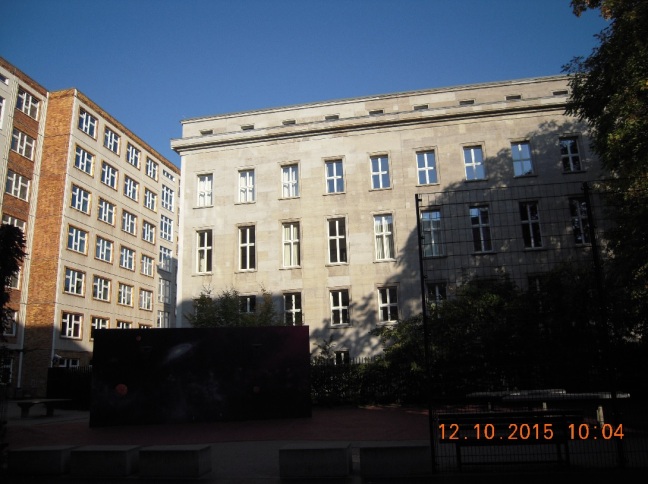 One last look at Wilhelmplatz and the former Propaganda Ministry, this time from across Wilhelmstrasse, a little down from the site of the Old Chancellery. The reinforced concrete in the foreground is probably not from Hitler’s bunker – that is a little way to the viewer’s right. That is probably from the bunker entrance of the Old Chancellery (the Vorbunker). Across the road on the left you can see Hess’ former offices (“Staatsverlag der DDR”) and on the right the buildings which you should be able to recognise by now: 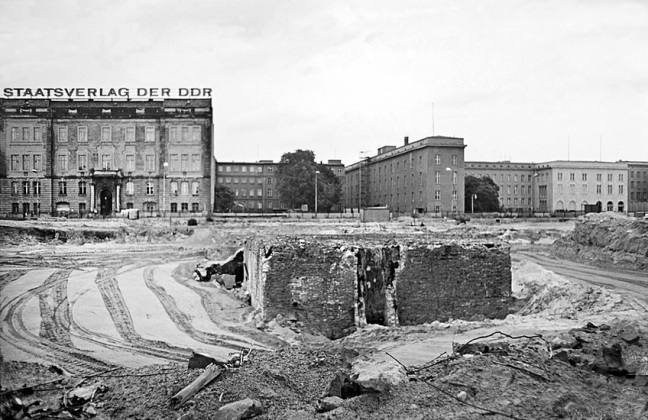 Now let’s have a look at the back of the building in Mauerstrasse. The quickest way is to follow the orange line in the Google Earth photo below. The red area is the site of the original Ordenspalais, the blue lines indicate the surviving Propaganda Ministry building(s), leave the green lined area I’ll explain it later and head for the pale green area which you should recall is now the North Korean embassy, formerly the Hotel … anyone? anyone? … yes, Kaiserhof! Well done! 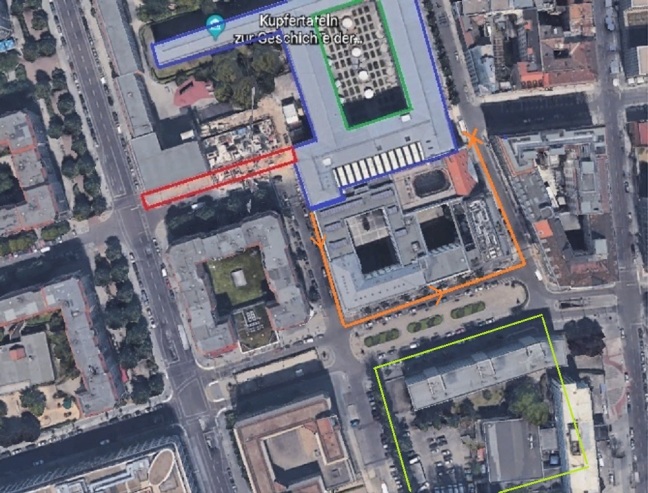 If you’ve walked this far, you’ve gone too far. See the eagle and swastika on the top right? That’s the end of the Propaganda Building and there is a matching one at the other end where you should have stopped. In fact, if you can see either of those eagles you need to stop drinking the local beer as they haven’t been there for seventy years: 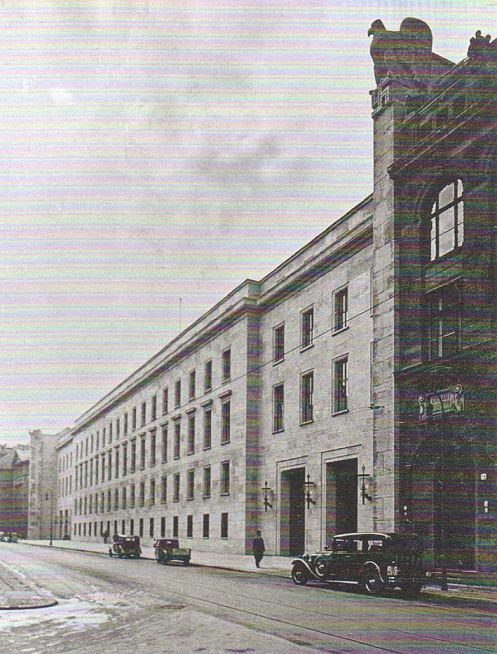 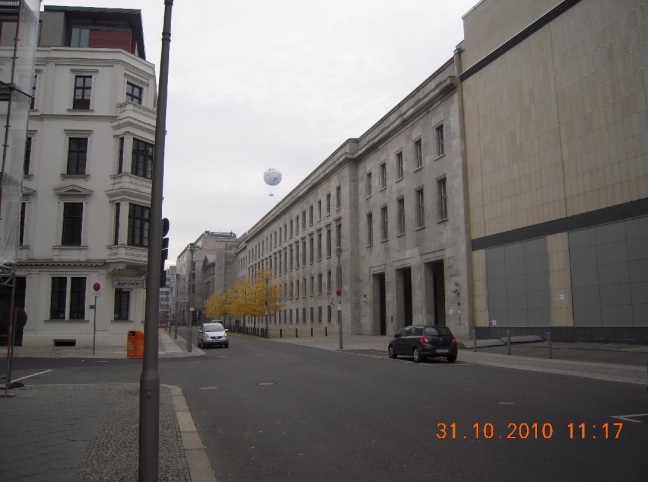 …and here’s where you should have stopped: 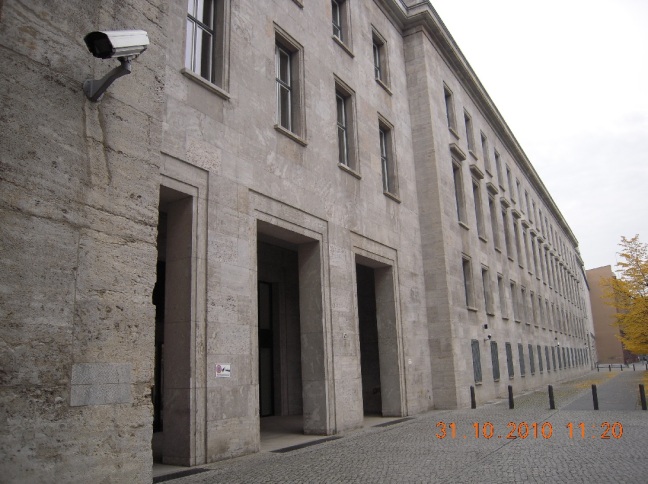 When it was new: 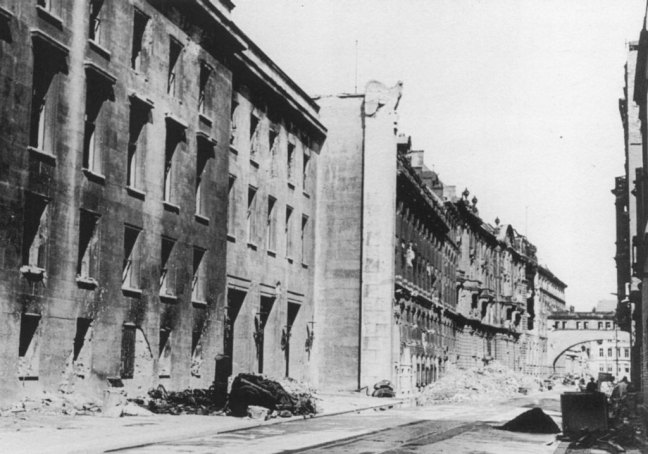 One last thing before we leave the Propaganda Ministry: I nearly went nuts trying to orient this photo from what I knew of the building: 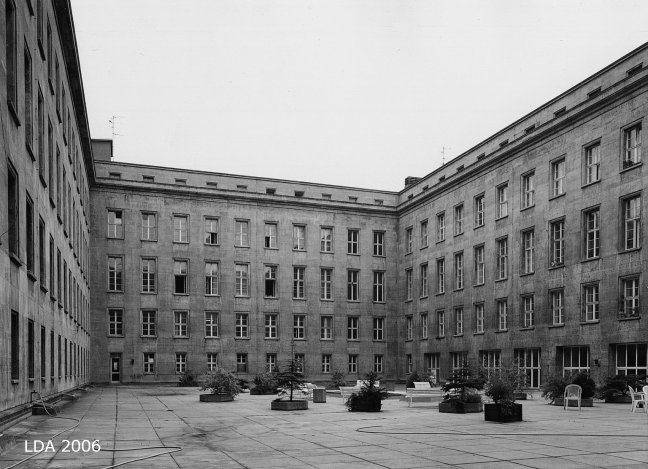 I counted the windows, compared the number and shape to all the other photos I could find, tried to match the aerials on the bloody roof and finally in despair I threw myself on the mercy of the good chaps at Axis History Forum (https://forum.axishistory.com/). Unfortunately due to the different time zones, all the European … ummm … enthusiasts were sound asleep, still up drinking or watching reruns of “Neighbours”. However, two members of the Forum came to my aid and within twelve hours three blokes from Australia had – courtesy of some sleuthing on the Internet – identified a (still-extant) building from a photo taken over eighty years ago in a city on the other side of the world. What an amazing world we live in! A far cry from my crystal set and going to the pictures in my pyjamas!

So where is this courtyard? The whole saga can be relived here: https://forum.axishistory.com/viewtopic.php?f=44&t=235205 but I wouldn’t bother. It’s the courtyard marked in green seven photos above (the one I said I would explain later). Here it is again, courtesy of Google Maps: 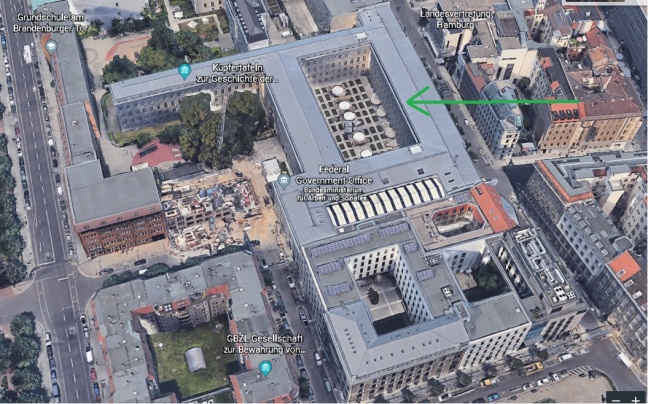 At the start of this blog, I said one of my reasons for doing it was to encourage people to go there and see it before it all gets demolished. And here is a final, classic example – once again courtesy of Google Earth. The photo below shows the still intact Ministry building, the modern replacements for bombed/shelled buildings and the reconstructed crossover bridge (red arrows):