So you’ve come back down Voss-Strasse with the site of the former NRK on your left and have reached Wilhelmstrasse again (red circle). Turn right (in the direction of Tempelhof, i.e. south). This is our planned route: the short red line is Wilhelmstrasse and the longer red line takes us back past Mohrenstrasse U Bahn station and through Zietenplatz to Glinkastrasse. It gets tricky here: for some unDeutsch reason Mauerstrasse turns into Glinkastrasse and then turns back into Mauerstrasse. Anyway, walk down Glinkastrasse until you reach the intersection (blue cirlce)with Leipzigerstrasse (up which we are going to walk to Potsdamerplatz):

Leipzigerstrasse runs for yonks in an easterly direction but we are interested in walking west towards Potsdamerplatz so you should come to this corner: 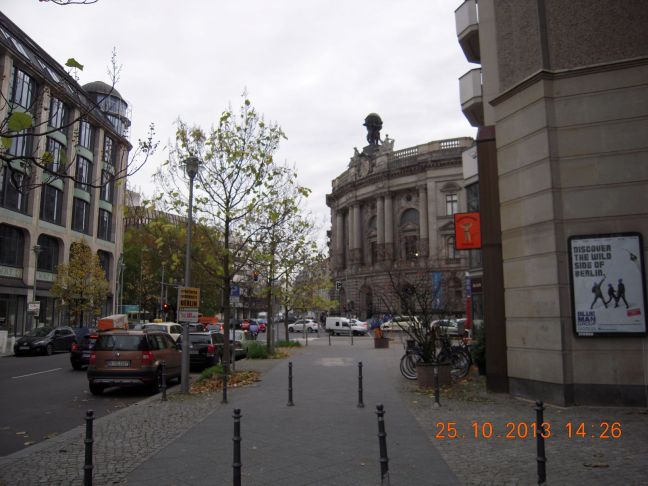 Feel free to venture into the building on the right to discover the wild side of Berlin but 74 years ago it would have discovered you in this very place. Cross the road and you’ll see what I mean. The building with the bloke on top holding up (yet another) globe is the former Reichspostamt:

and I’m including this following shot simply because I think it’s a wonderful watercolour:

You notice in today’s iteration of the building, the two towers flanking Globeboy have disappeared, almost certainly because of battle damage and there is still evidence of it to be seen on the Mauerstrasse side:

What an eloquent and desperate story these spang marks could tell. Leipzigerstrasse was one of the few major streets still in German hands when the capitulation occurred. It was the staging area for a number of armoured vehicles during the battle so these spang marks must show the limit of Soviet penetration when they were made. Now the building is a Communications Museum, a Mecca for phone enthusiasts i.e. pretty much everybody these days as far as I can see…

Hmmm… just an aside: if you are like me and find all these references to north, south, east and west confusing, here is a little map of this area to help you out:

You are currently where the green circle is on the map above. Now if you walk back up Leipzigerstrasse  – which is to say in a westerly direction – you will eventually come to a corner (just before the blue arrow) across which you will see this building: 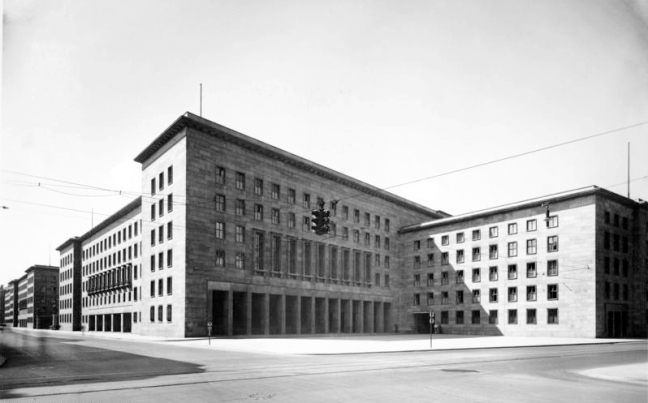 This is the former Ministry of Aviation, built from February 1935 to August 1936, at the time the largest office block in Europe. Runs an entire block along Wilhelmstrasse. It was comparatively undamaged in WW2 and what you see is pretty much what you would’ve seen back in the day minus some embellishments such as swastikas and bas reliefs of marching soldiers. It is a biggie:

You can make out the Topography of Terror exhibition in Niederkirchnerstrasse (formerly Prinz-Albrecht-Strasse, yes, home of the Gestapo HQ back in the day) at the extreme left and Leipzigerstrasse at extreme right. Incidentally, the current Topography of Terror exhibition (highly recommended) has some of the former cellar/cells on display under what appears to be solar panels in the previous photo (extreme left). It was in those very cellars that Henri Joseph Fenet

and his men were holed up when the order came to surrender in May, 1945. If you go back to the first photo in this post, you will see that the French SS – the only ones in Wilhelmstrasse between the Soviets and Hitler when they surrendered – were only two city blocks from the NRK. In fact, Fenet and the Charlemagne survivors were intending a ‘last stand’ at the NRK. Talk about “None shall pass!” 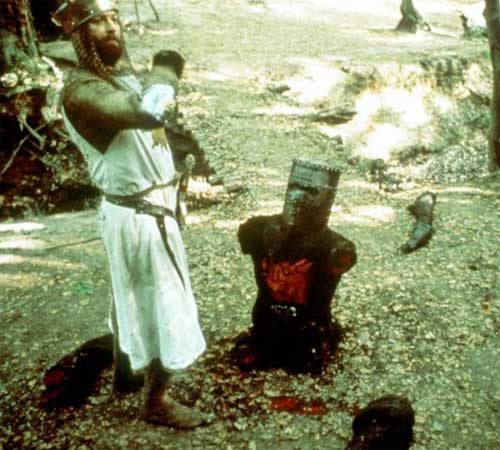 Now there are lots of photos on the internet of various funerals at this building, including Molders and Udet (in fact I think Udet suicided in this building but I wouldn’t put my house on it) so I’m not going to post them. Google them if you haven’t seen them. Instead, here’s a nice shot of the building in its heyday (notice the eagles on the gateposts): 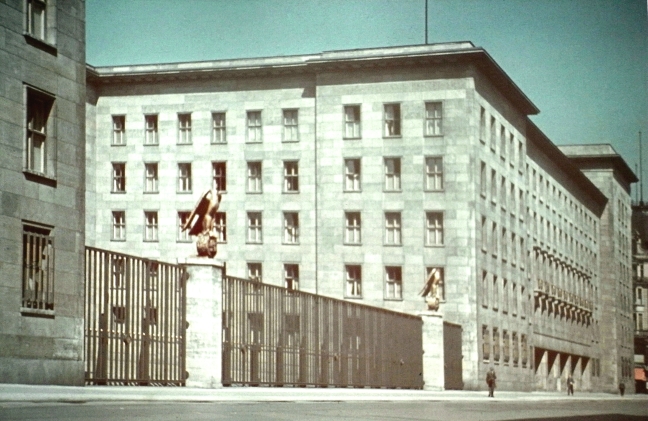 The building was comparatively not-knocked-around too much after the battle in 1945 and was used by the Communists as “The House of Ministries”. Around 1950, the authorities decided they need a giant mural so they commissioned a bloke called Max Lingner to produce it. Max did a slap-up job with lots of cheery East Berlins waving and smiling that smile usually peculiar to advertisements for exercise machines. However, the authorities decided it needed more of a political bent so poor old Max had to finesse it so much even he got sick of it. The final iteration can be seen today in that open courtyard fronting both Wilhelmstrasse and Leipzigerstrasse:

You’ve got to wonder if the local East Berliners didn’t crack jokes about the hokiness of it all given their knowledge that the Stasi were reading their Christmas cards, shopping lists and what-have-you. Max would’ve been better off drawing a long line of dobbers …

However, on June 16th 1953 an uprising began which really started the next day after masses of protesters forced their way onto the above courtyard and demanded reform. The Soviets sent in tanks and were embarrassed when photos like this (taken in Leipzigerstrasse) were published worldwide:

There is a memorial to this uprising and it is in the same courtyard. If you can’t see it, look down. You’re standing on it. Here’s an article on the Uprising: https://libcom.org/history/1953-the-east-german-uprising

If you’re interested in the WW2 side of things, walk back down to the main gates. Turn around and look back in the direction Of Unter den Linden and you’ll see that you are standing where this happened:

And finally, if you have one of those neighbours who makes you want to vote for the death penalty just for saying “Hello” to you and if said neighbour is gloating about his/her new Mercedes, just ask them with a straight face why Mercedes don’t use this ad anymore: 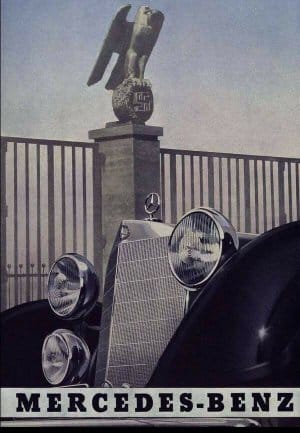