Having left the Air Ministry building we walk a little further up Leipzigerstrasse in the direction of Potsdamerplatz. Howevere we’ve barely gone a few steps when over the road (right) we recognise our old friend the annex of the Transport Ministry from Post 16(a): Voss-Strasse The Left-Hand Side: 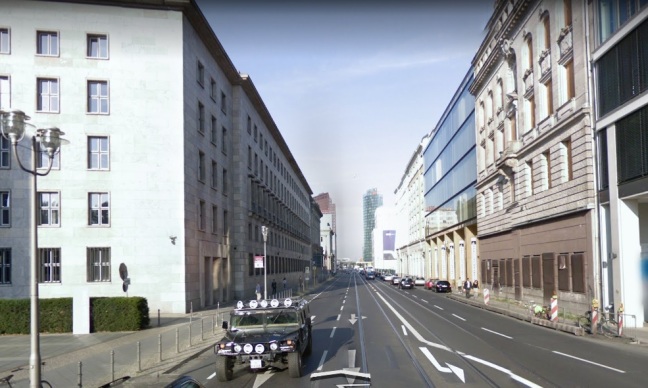 and a little further on, on the left-hand side we encounter the Herrenhaus (Prussian House of Lords) again:

So what’s interesting about Das Herrenhaus? Not much, apart from the fact that it’s still there and was built on the site of a palace owned by Felix Mendelssohn Bartholdy’s father – yes, that Mendelssohn, the musician bloke whose grave, incidentally, we will eventually visit while working our way down Wilhelmstrasse. The other interesting thing is that this building was used as the original courtroom of the Volksgericht (The People’s Court), however the proceedings were soon moved to Bellevue-Strasse 15 in Potsdamerplatz (now the Sony building) and I believe this is where the July 20 plotters were ‘tried’ and where Roland Freisler was killed: https://en.wikipedia.org/wiki/People%27s_Court_(Germany)

Here’s a pre-war photo of the area we have so far explored:

The blue arrow shows the Transport Ministry annex and the red arrow indicates the Herrenhaus. The photo is quite early, i.e. pre-1933 at least,  because the houses on the north side of Voss-Strasse haven’t been demolished and the whopping great lump which constitutes the Wertheim store is still intact. And here it is:

The woman on the right looks like she has just realised that she left the stove on in this great photo from the Facebook page “Roaring Berlin: Die Vergessene Metropole”, found here: https://www.facebook.com/groups/roaringberlin/ and those trams would most likely end up on their sides as barricades later in 1945.

However, remember the stone-throwing protesters in the 1953 uprising? This photo comparison shows where the event occurred:

The stone throwing must’ve really upset the Soviets because they soon reduced Leipzigerplatz to: 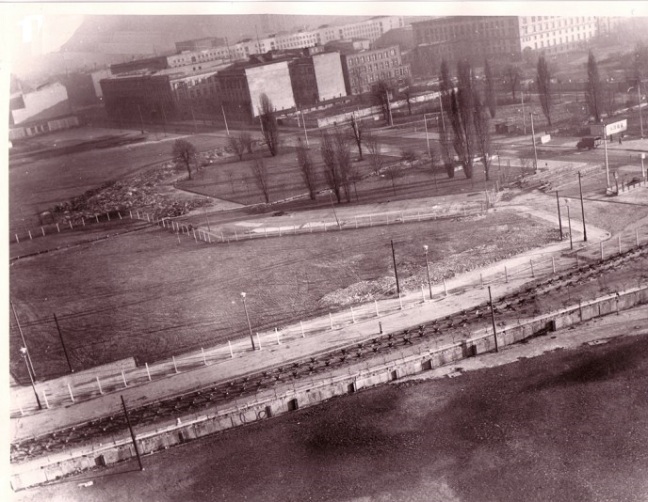 In the first photo (i.e. after “And so does this …”) you can make out the Propaganda Ministry building and Hess’ office (top left) and the demolition of the NRK (middle left). The middle photo shows the distinctive shape of Leipzigerplatz and the mid-incarnation of the Berlin Wall. We know it’s not an early version of the wall because it’s a wall (not a fence – shades of Trump!) and it’s not a late version because it’s not covered in graffiti. In the third photo, the trees at far mid-left indicate the edge of the Tiergarten and you can make out the Propaganda Ministry at mid-right. The green square in front of the Propaganda Ministry constitutes half of Wilhelmplatz before the awful school buildings were inflicted on it. Thus the area bottom-left is Potsdamerplatz and both Leipzigerstrasse and (parallel to it) Voss-Strasse can be seen running left to right across the bottom half of the photo.

It is, IMO, worth remembering as you walk up or down both Voss-Strasse and Leipzigerstrasse that before 1989 you would have been cut down by rifle fire had you walked in those very same spots. More on this shortly … 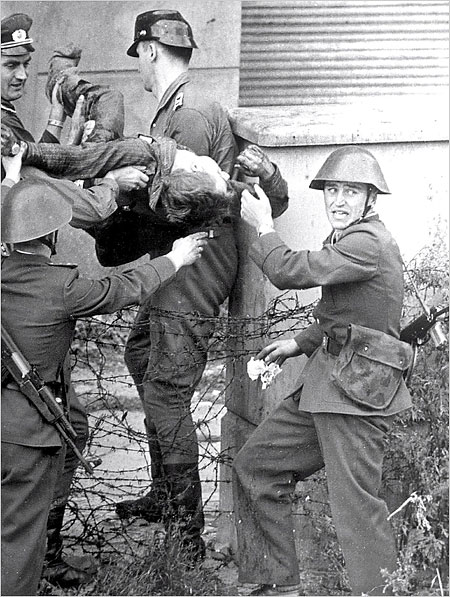