There can’t be many of those interested in this period of history and the battle in this city who haven’t seen the “last footage” – as far as is currently known – of Hitler greeting some Hitler Youth in the Ministry Gardens just outside his office. The footage (with translation) can be found here:

although the author of this text feels the need for a little editorialising: “Willi Hübner was compelled to tell his story for the cameras“.

“Compelled”? As far as I can see the little bugger looks dead chuffed. The rest of the text gives a little of Willi’s later biography. You can find some info on the kid standing next to him here:

and you might note Artur Axmann, the HJ leader, saluting with his left arm as he had lost his right arm on the Eastern Front. 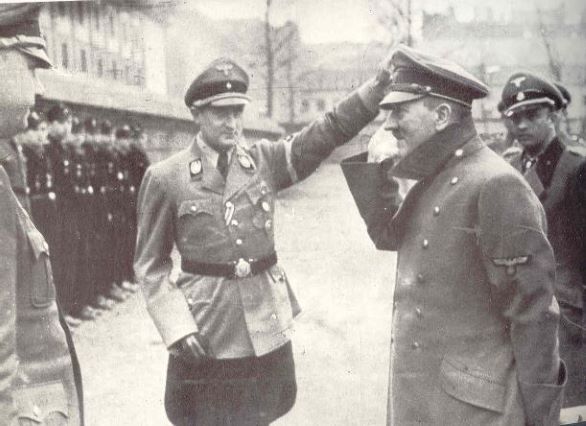 These next two photos show Willi Hubner being decorated in Lauben where he earned his Iron Cross Second Class, first by Dr Goebbels and then by General Schorner(?). 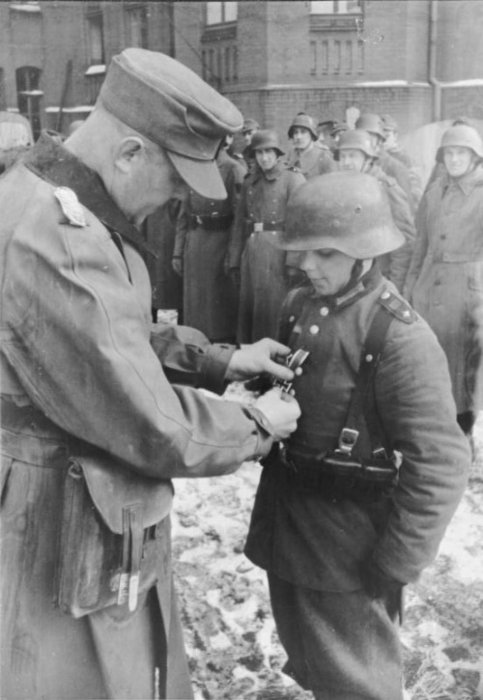 Willi Hubner was 16 at this time even though he looks 12, which was the age of Alfred Czech, the kid standing next to him in the following photos from the NRK terrace.

Hitler arrives. Note the greenhouse and a corner of the ornamental pool on the right. This will become important when we try to establish where on our barren ground this event took place. 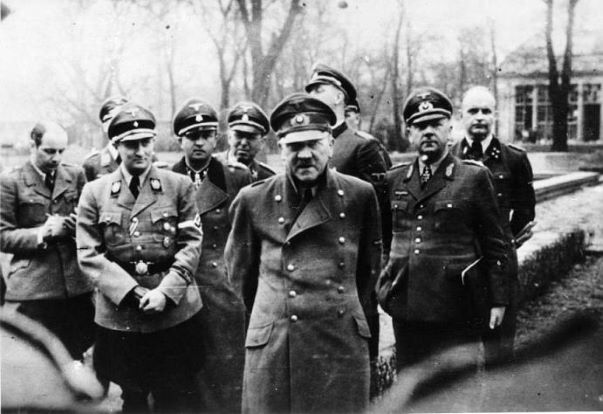 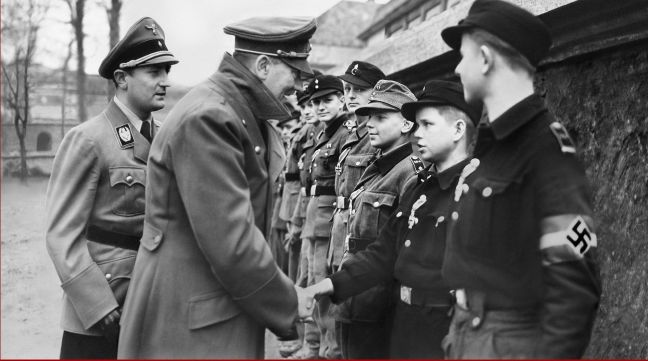 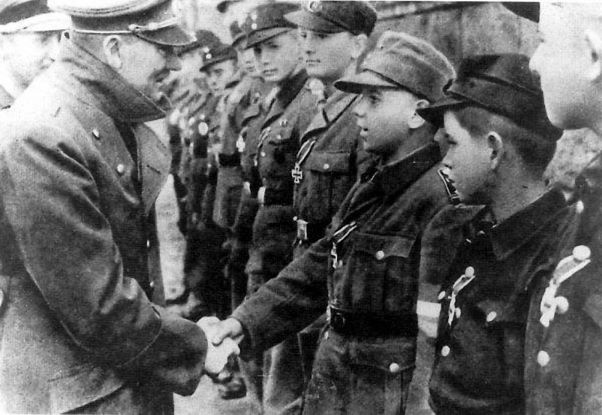 … all carefully recorded by the cameraman (rear): 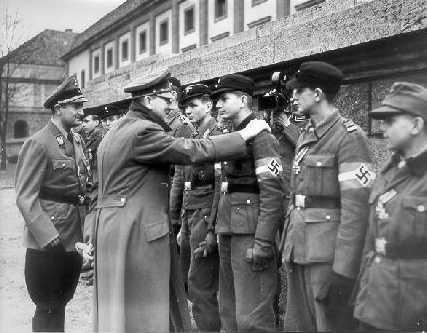 So where did it happen? Can you see the spot today? Answer: I don’t know but I believe you could still in 2017. I am typing this in Sydney, Australia, one year (2018) after I took the photos of Voss-Strasse in the previous post so I don’t know if it’s been built upon yet. But it will be. But let’s assume you can still access the site.

Here’s a photo I pinched from Axis History Forum. Ignore the Villa Kempka caption – that was from the original poster whose name I forget but whom I thank. Where was I going with this? Oh yes, the redline. You will see that the ruined Propaganda Ministry building points pretty much to the spot on the terrace outside Hitler’s office and the blue circle shows the corner of the ornamental pool we saw above:

If you look at the next photo from Google Earth you will see a green line.

That is the orientation of the former Propaganda Ministry wing (today a school), as above. It points to An der Kolonnade ( a street which didn’t exist pre-war and is marked in blue). If you cross the street to where the red line is, the first part of An der Kolonnade points pretty much to the back of the Chancellery, roughly outside Hitler’s office where the award ceremony took place. What makes me think this? Have a look at this second photo which I found on Pinterest and you will see an overlay of the Chancellery and the current buildings. You should see that the line of An der Kolonnade points to the area in question, I believe:

Now look back to the previous photo (the Google Earth one) and you’ll see that the red cross indicates some barren ground to the right of this white building:

… and that would be this barren ground, keeping the white building as a reference point:

Now you might recall from Post 18. The West Wing that the white building pretty much marks the end of the west wing of the NRK so we need to go about halfway down the Mittelbau (and remembering that the red cross will be in line with the middle of the Mittelbau, i.e. Hitler’s office) we find this patch of bare ground:

Moving from the footpath of Voss-Strasse towards where the red cross should be (and you’ll need the Google Earth photo above with you to work out how far to walk) you’ll come to this spot and that, I believe , is where the HJ award ceremony occurred seventy-three years ago:

As close as I could get due to the bloody fence but I believe the ceremony took place just on the other side of the fence:

Nothing beside remains. Round the decay
Of that colossal Wreck, boundless and bare
The lone and level sands stretch far away.”

2 thoughts on “29. Hitler Youth Awards: Ceremony in the Garden”