Remember at the start of this blog I recommended that you get a wriggle on if you want to see some of the surviving historical architecture and other sites in Berlin? Well, here’s why.

As we walk up Voss Strasse towards Potsdamer Platz, on the corner we see the Mall of Berlin. Opened in 2104, it occupies the site of the former Ministry of Transport. Up until 2014, you could still see the ruins of the Ministry with a nondescript DDR wall around them. In fact. the Berlin Unterwelten (https://www.visitberlin.de/en/berlins-unterwelten-museum) used to access the air-raid shelters/bunkers from the ruins of this building.

Here it is in 1946. The building with the red arrow is the only surviving original building and indicates the end of the Ministry of Transport building. The large building next to it (further down) is the Wertheim department store:

And here’s what you missed by not visiting before 2014:

I am not suggesting for a moment that these ruins should have been saved. They were beyond redemption but what you got in their place was this:

Another shopping centre – and quite a good one if “your future dream is a shopping scheme” (Source: Sex Pistols) – but if you happen to be in there buying a fridge magnet or a novelty sign or whatever, it’s worth remembering that you are standing on the site of a building that organised the trains to take so many Jews and others to concentration camps:

and in the building which previously stood on that site worked one Erich Klausener, a Ministry official who made the mistake of not only contributing to the Marburg Speech (https://en.wikipedia.org/wiki/Marburg_speech) but also rubbing salt into the wound by delivering his own speech one week later which pretty much called out the Nazis.  (https://en.wikipedia.org/wiki/Erich_Klausener).

He was assassinated in his office in the Ministry of Transport during the Night of the Long Knives. Coincidentally – or come to think of it probably not – he had worked on the Marburg Speech with Herbert von Bose who was also assassinated in the Night of the Long Knives just across the street in the Palais Borsig in 1934. (See Post 10: Getting Around). Here’s what Klausener looked like and a shot of his grave, courtesy of Wikiwand. His gravesite is in St Matthias Friedhof, Berlin.

The last sentence on the plaque is interesting – “Dr Klausener was shot in his office on 30.6.34 by an SS man”. That SS man was Kurt Gildisch. He is worth a Google if you like to read about alcoholic schoolteachers (excuse the tautology):

Moving right along, we come to the only surviving original building on Voss-Strasse, (Number 33 Voss-Strasse) now thankfully heritage-protected. This building had become a part of the Ministry of Transport which had frontages on three streets: Leipzigerstrasse, Wilhelmstrasse and Voss-Strasse.  The Leipzigerstrasse frontage still exists and is one of only three surviving period buildings on that western end of the street, the others being the Air Ministry and Das Herrenhaus (former Prussian House of Lords) :

Bearing in mind that Leipzigerstrasse was the staging point for SS and other troops during the battle for Berlin it’s surprising that either building survived as well as it did: 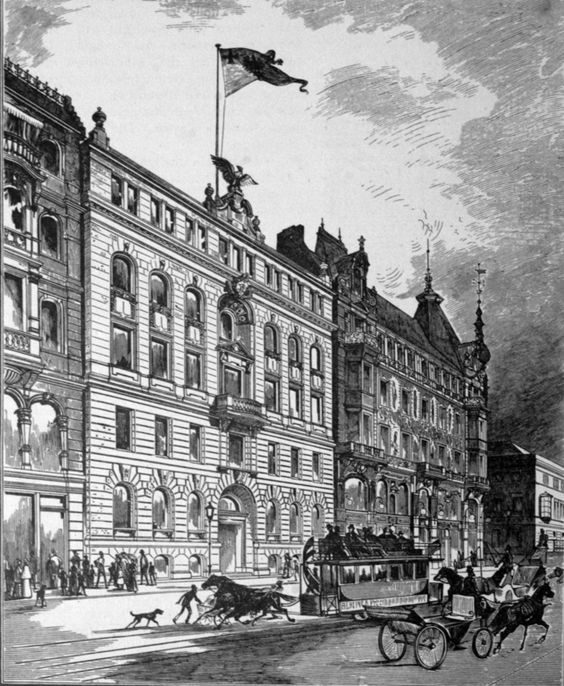 The building has since been modernised/gentrified although the sandstone facade has been retained and the building is thankfully heritage listed. There’s an excellent Youtube clip of the pre-gutted building (including its underground bunker) here:

And here’s a screenshot of the tunnel to the U Bahn lines and the Kaiserhof Hotel:

Next  we see the Transport  Building in its context, between the main Ministry of Transport building and the Wertheim department store:

and here it is on its oddy-knocky, awaiting the developers to build stuff around it. Yes, it’s the same building: you can make out the Czech Republic embassy at the end of the street. No Mall of Berlin yet (slack, Google Earth, slack!). On the left-hand side of the photo are some DDR aparttment blocks which stand where the New Reich Chancellery stood.

And here it is, pre-war, and looking pretty:

The building survived the demolition of the New Reich Chancellery (which was just across the road) and was at one stage the only building left on the block. Amazingly the statuary remained fairly intact. Remember, this was the street where the (alleged) appearance of Soviet troops had been reported to Hitler just before he topped himself. I have read that the appearance of Soviet troops in Voss Strasse made Hitler realise that both his time and the jig were undoubtedly up. However, I don’t believe that Soviet troops penetrated to Voss Strasse until Hitler was dead as the Soviet advance was still being held at the Gestapo HQ on Prinz Albrecht Strasse by units of the 33rd Waffen Grenadier Division of SS Charlemagne (1st French) and the Soviets still hadn’t taken Potsdamer Platz at the end of Voss-Strasse (but it does go to show how close the Soviets were when Hitler pulled the plug. They probably would have made a greater effort had they known that he was in – or rather under – the New Reich Chancellery). In the foreground are the ruins of the New Reich Chancellery:

The building itself was a bit knocked around during the Battle for Berlin and still has (or still had in 2017) several interesting, different-calibre spang marks. I photographed the building for the first time in 2011:

and someone came knocking in 1945:

and here it is under renovation in 2013:

and finally rubbing shoulders with other buildings again:

So if you are a lucky building, you survive two world wars and a major battle in your city and you end up a trendy fashion house: