Allegedly the last photos ever taken of Hitler – and for my money you can forget the ‘allegedly’. Hitler looking at the ruins of the NRK with his adjutant Julius Schaub:

Notice the damaged sconce on the wall behind them (below). That would fetch a pretty penny on the collector’s market (but don’t forget my advice about collecting this stuff). I would have expected a genuine NRK sconce to have reached more than $6 000 even if it were auctioned in 2011 (scroll about half way down):

Schaub (below) trying to get Hitler to look on the bright side:

During the battle for Berlin the NRK was badly damaged (unlike the Air Ministry a little further down Wilhelmstrasse) although I have been unable to find any evidence of actual fighting inside the building despite such claims from some Soviet sources. German sources suggest that those who could leave pretty much did – or they shot themselves. The building was soon stripped of what was lootable and then fell into decay. As noted before, the marble from the Mosaic Hall was used to clad the Soviet memorial in Treptower Park and, IMO without doubt, Mohrenstrasse U Bahn  station which at the time was renamed Thalmannplatz after the pre-war leader of the KPD. (It was re-named – again – in 1968 as Otto-Grotewohl-Strasse after the first German prime minister of the DDR). In 1949, the building was demolished using a narrow-track railway to remove rubble. 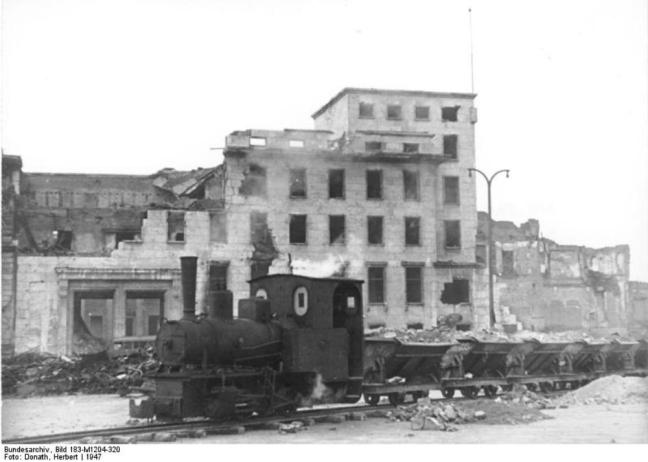 Here’s a view of the terrace outside Hitler’s office, looking west from the rear of the Reception Hall of the Old Chancellery. The Bunker entrance would be to the photographer’s right. At a guess I would suggest 1946. Notice the bronze horses are already gone: 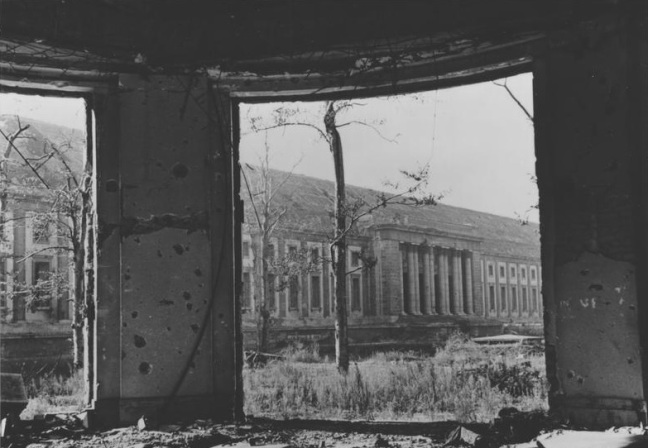 In this photo below, the photographer in the previous photo was standing inside the round structure to the right through whose shattered windows you can make out the covered walkway which ran some 150 metres plus alongside the Dining Room. 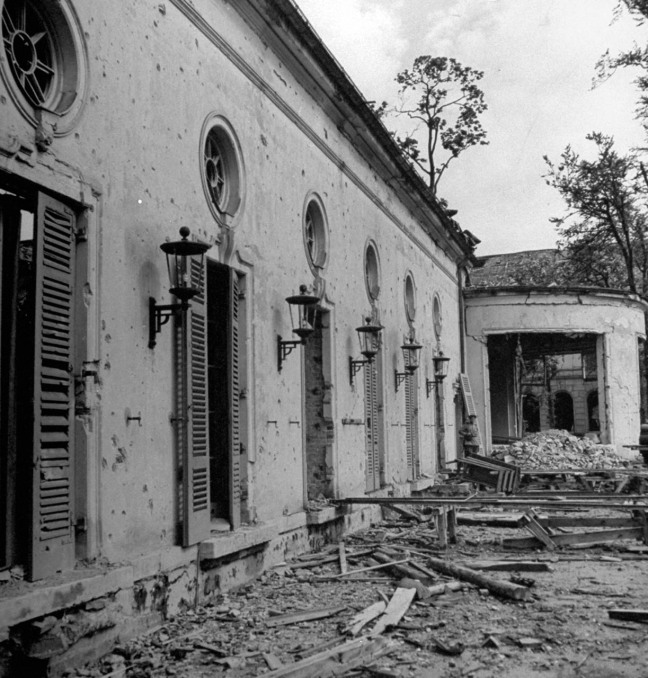 Some shots inside the Old Chancellery Reception Hall. In the first there are three pillars still standing at the far side: 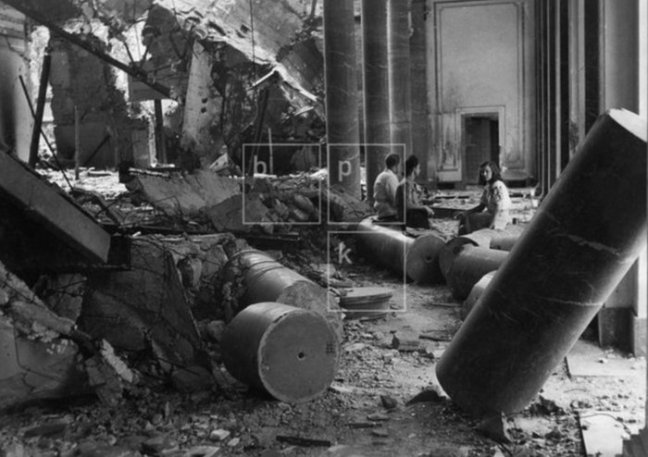 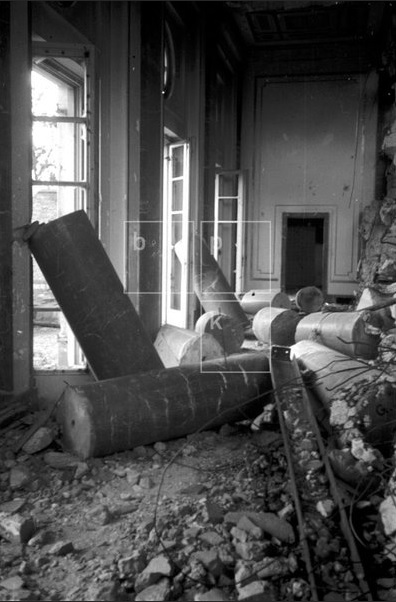 The winter of 1945 was particularly severe and trees in the Tiergarten were cut down for firewood. In the Spring vegetable gardens sprang up wherever there was spare ground, including the grounds of the former Ministry Gardens. This first photo shows Trummerfrauen working in the Ministry Gardens close to the wall which separated the SS barracks from the gardens. Notice the far end of the covered walkway appears to be already demolished: 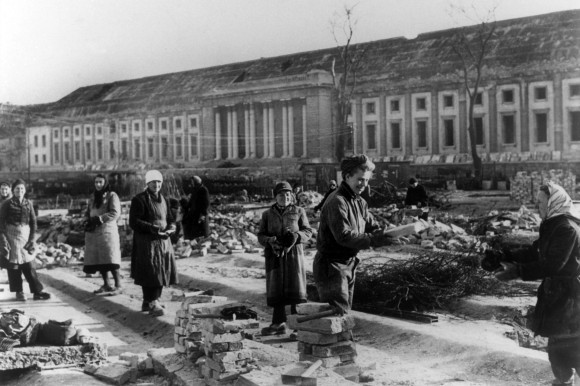 This following photo may prove contentious. Traudl Junge in her memoir “Until the Final Hour” mentions at one point that some part of the roof of the Fuhrerbunker protruded above the ground . This caused no end of a kerfuffle at Axis History Forum as it was news to a number of otherwise educated-better-than-average-about-the-NRK anoraks, including Your Humble Narrator. Some of the more argumentative types frankly refused to believe it, presuming that Traudl had confused it with Adolf’s skateboard ramp or somesuch. However, Traudl proved to be correct. Fancy that!

… and here’s more evidence (the blown up bunker exit and tower in the background). Who would’ve thought that someone who was there would get it right?

Incidentally, consider this photo from the car park in Gertrude-Kolmar-Strasse:

If you’re standing where the blokes with the bikes are (i.e. slightly centre-left), informed opinion has it that you are standing in front of the concrete emergency exit seen toppled in the photos above. The funeral pyre of Adolf and Eva Hitler was roughly where the red circle is. Feel free to believe tour guides, information boards and Sandra Sully to the contrary if you like but those I trust (including Rochus Misch) put the site where the red circle is. Give or take a metre. I will give a link later to confound those who want to argue the toss (henceforth ‘tossers’).

…and here’s three Australian blokes with a faulty compass looking for Lasseter’s Reef: 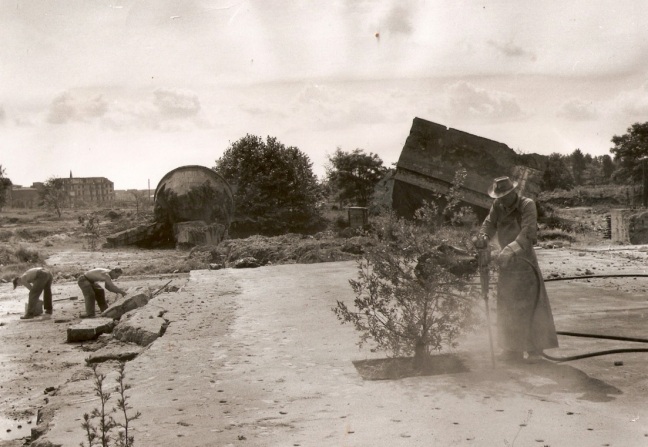 This photo following was obviously taken before the previous two black and white photos. These two Trummerfrauen are lost in thought while sitting on the edge of the pool between Hitler’s office and the greenhouse. In the background can be seen the Reception Hall of the ORK and the tower and bunker exit seen toppled in the previous photo. 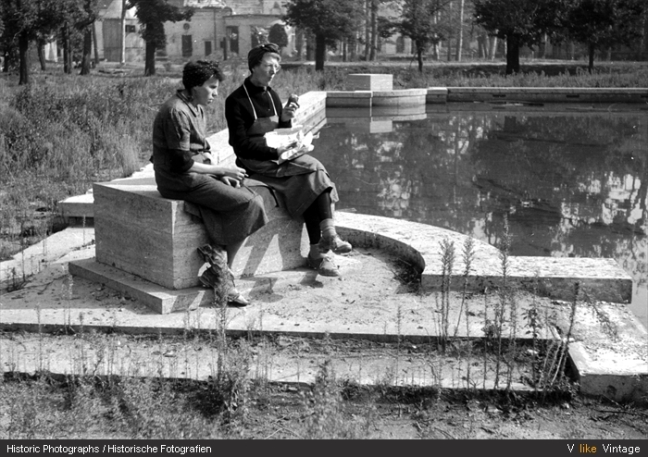 The women below are tending one of the previously-mentioned vegetable gardens. In the background is the SS wall with the SS barracks – or the remains thereof – behind. 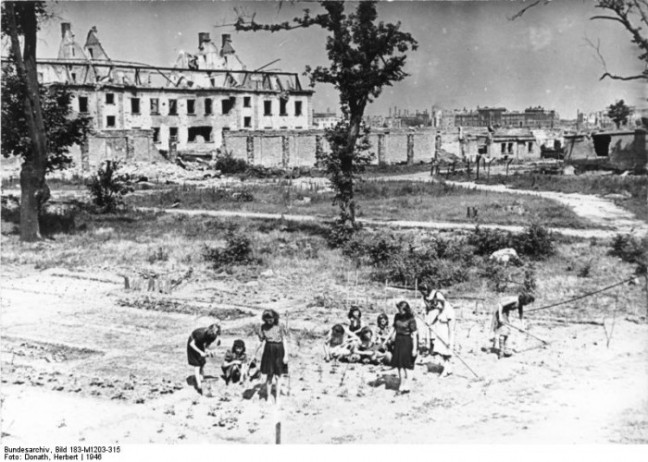