Who has never collected anything? What joy to find the last piece in your amazing collection of stuffed squirrels! The piece that will make your fellow stuffed-squirrel collectors green with envy!

Yes, collecting is a wonderful if expensive pastime as long as your wife doesn’t find out, particularly if you like collecting Third Reich stuff. Here’s how to avoid spending – and probably losing – a vast deal of money in collecting Nazi stuff, specifically New Reich Chancellery stuff.

Well that was pretty easy but a further word for the desperate, addicted relic-collector: I started collecting at around the age of 14 or 15 years. In a moment of uncharacteristic intelligence, I decided to collect belt buckles because they are very difficult to fake. Unlike paper documents or cloth uniform collectibles, the financial investment required to create accurate, fool-an-expert dies would deter most fakers. Also, if you’re going to spend a tidy sum developing the process, you’re going to have to do a big run of buckles to make a profit and as soon as large numbers of any given buckle or maker hits the market, values go down simply because the buckle is so common. So fakers would consider buckles way down the list of profitable fakery. Or so I thought. Turns out that theses days there are a number of factories churning out pretty much everything Third Reich related, including belt buckles. Don’t take my word for it (and these are pretty good, IMO):

Which brings me to the point. Have a gander at this: 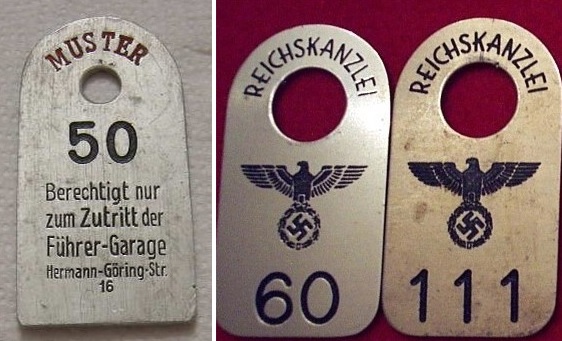 Reverse of the cloakroom chits:

A collector of NRK desiderata would respond to the above like Alex responds to Beethoven in ‘A Clockwork Orange’: “Oh bliss! Bliss and heaven! Oh, (they are) gorgeousness and gorgeousity made flesh.”

However, the items shown above are real and genuine and come to us courtesy of Axis History Forum. Imagine if you owned an entry token into the Fuhrer-Garage on Hermann-Goring-Strasse! Or a cloakroom token or two with swastikas and numbers on them! Your mates would have to go back to squirrel-collecting. But how would you know if they were real? Short answer: you wouldn’t. You’d have even more trouble with these: 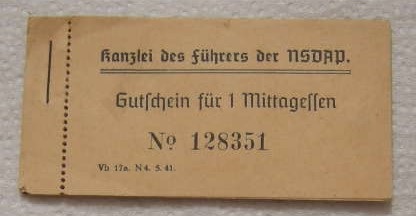 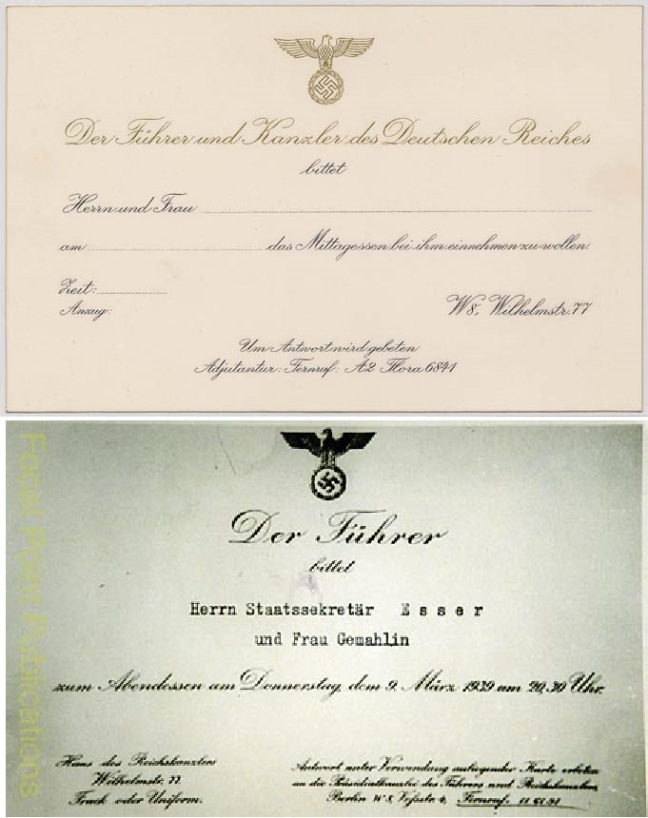 Above we see a NRK menu, small plate, piece of NRK marble, a place setting (or perhaps a tablecloth?) and a Wellner teapot and some cutlery. On page 119 of Cowdery’s book he mentions that large amounts of this stuff have been faked. You will find similar problems with the provenance of all Third Reich collectibles, particularly those from Hitler’s Berghof at the Obersalzberg, Berchtesgaden. Sadly, there is probably a lot of genuine stuff still in the hands of Russian families whose grandfathers etc fought in the battle. It’s unlikely that those who have genuine relics will achieve their true value should they decide to sell due to the proliferation of fakes.

However, here’s a souvenir that would make a great picnic table in someone’s backyard: 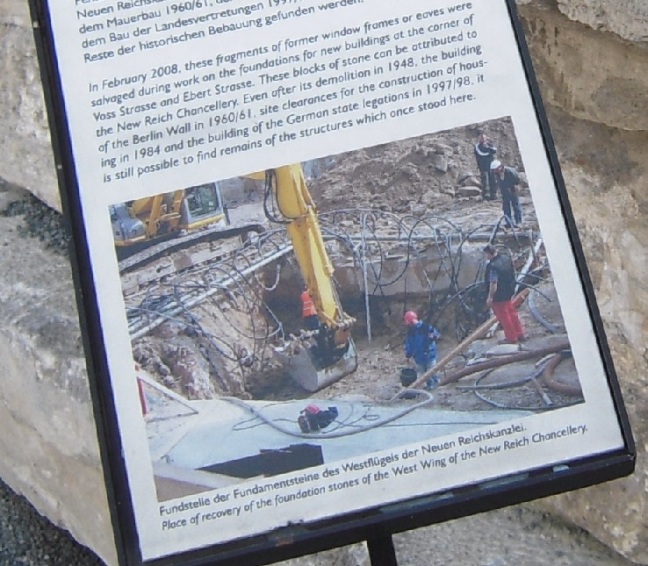 Sadly, this foundation stone is no longer in situ at the previously-mentioned boardwalk. As of 2017, this stone and the boardwalk itself have disappeared. Pity.

So once again, if you are thinking of starting a collection of NSDAP relics, particularly if a bloke down the pub has a genuine SS dagger that his father found in the ruins of the NRK, my advice is still…

Let’s get back to the tour …