You’ve walked around the corner with the Peking Ente on your left and after a few metres you’ll come to where I believe the entrance to the Ehrenhof was (give or take a metre or two): 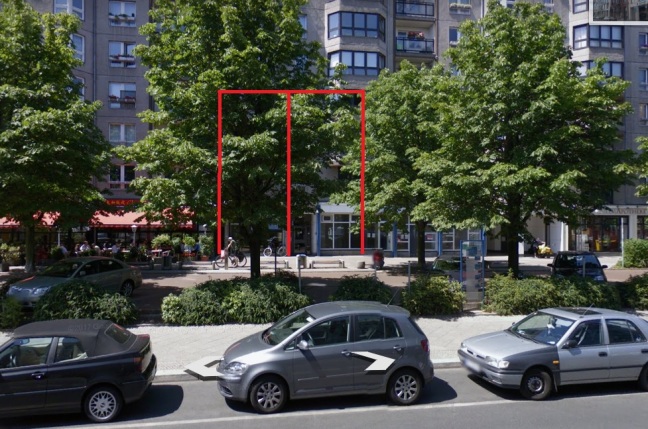 Back in the day, inside would have looked like this:

The two statues flanking the doorway are by Arno Breker who was heavily into this heroic stuff. The one on the left was called “Die Partei” and the one on the right “Die Wehrmacht” (by Hitler, Breker had other names for them). There’s a copy of “Die Wehrmacht” in the (highly recommended) Zeughaus museum on Unter den Linden. If you want a laugh or just like the sound of grinding teeth, go up to one of the museum attendants, point at the statue and say “Oh wow! That’s great! Is it the original?”. They love it!

Of interest is the news that in 2015, ‘authorities’ discovered a collection or two of Nazi artworks, the Entartete Kunst of today. Allegedly they discovered the original of the Wehrmacht statue above on an estate in Kiel: 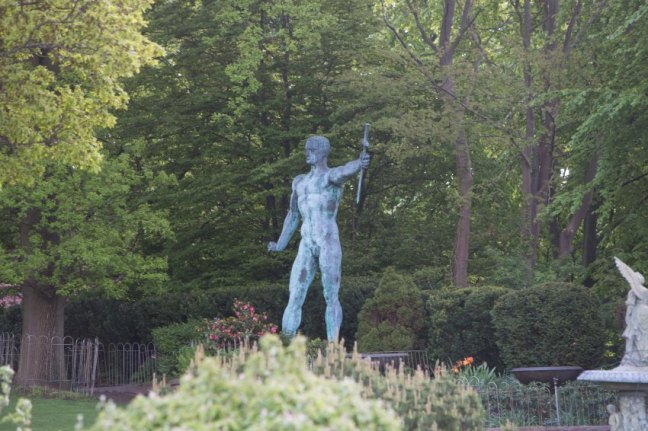 They also claim to have discovered the original two bronze horses from outside Hitler’s office but I’ll deal with that later. I have my doubts. How did these large statues survive? The Russians capture the NRK and send eagles, banners and what-have-you to the Red Army museum in Moscow but somehow miss these statues? Even if they did, who transported them to their hideout? I cannot imagine the Russians agreeing to Steptoe and Son bowling up with Hercules the horse to cart away large lumps of statuary. I will be the first to admit I’m wrong when somebody explains the provenance of these things …

Here’s an update on the fate of the bronze horses. I haven’t read this book (my Dutch isn’t up to scratch) but the film rights have been sold so there’s a chance SBS might add it to their mammoth inventory of Hitler documentaries:

Back to more pressing issues.

So you’re in the Ehrenhof. Turn around in 1936 or so and you would have seen this:

Remembering that – were those doors open – you could see our old friend the Ritterschaftsdirektion. Don’t believe me? 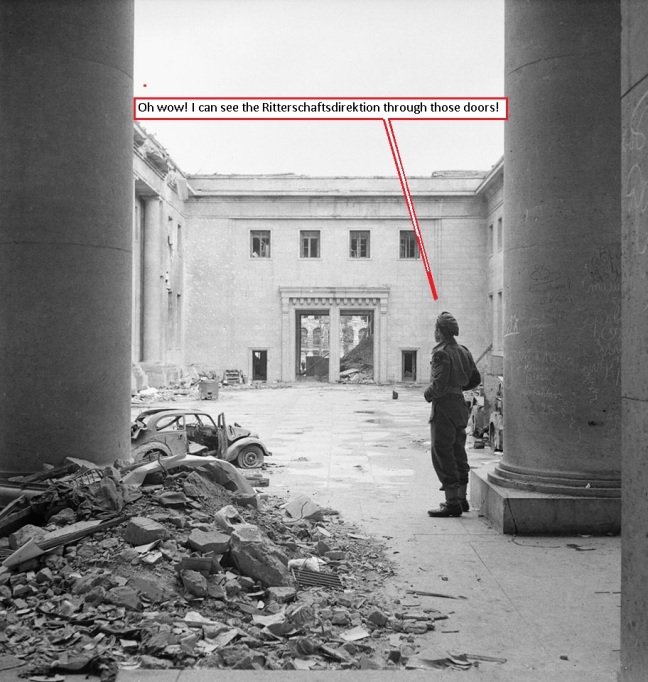 OK, this is the quick tour. There are zillions of photos on the Internet of the NRK – try Pinterest, for example. We are going to give the Vorhalle (reception area) the flick and mosey on straight into the Mosaiksaal, or Mosaic Hall in English. This would’ve been some sight: 46 metres long by 20 wide by 16 high(!) and the whole thing done in marble and mosaic. 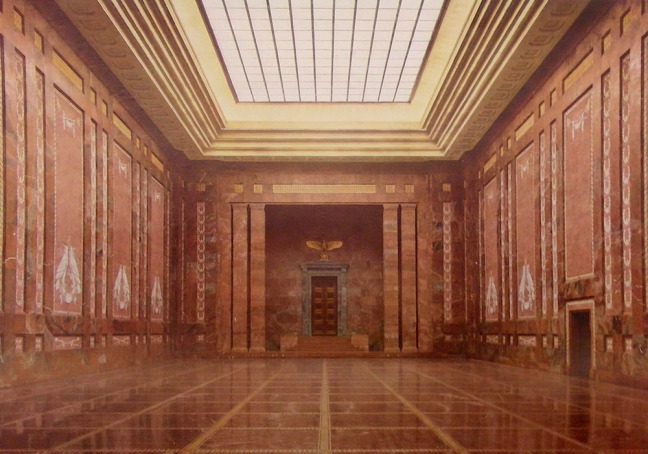 There were nine of those mosaic panels with each holding a fine mosaic of two eagles. I have read that one of these panels has survived and is in the Zeughaus on Unter den Linden but I have yet to see it. 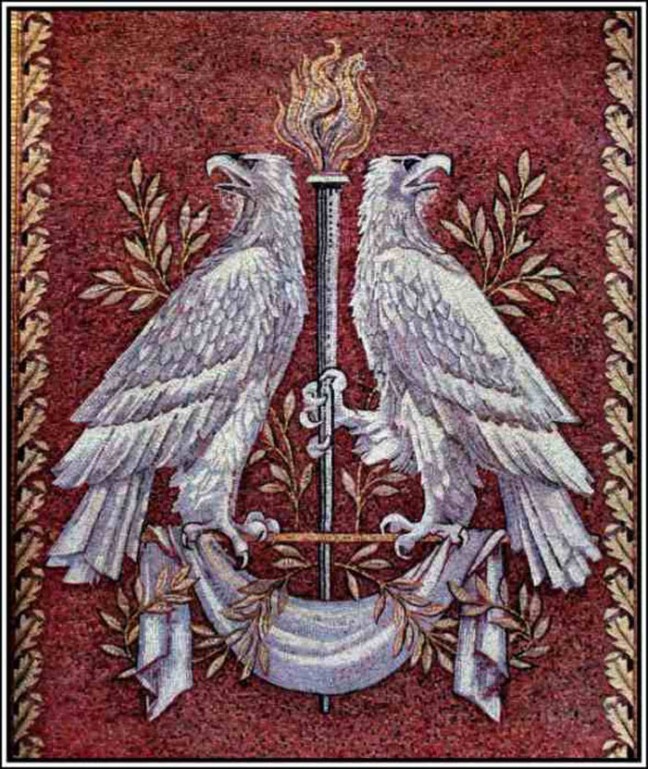 These things were eight and a half metres tall and two and a half wide but I can only find one photo of someone actually standing beside one – it’s Ullstein 00042099, as seen in Ronald Pawly’s book. To give you some idea of how big these buggers were I’ve invited the Beatles to stand in for the Nazis even though they only got lousy MBEs instead of a Blood Order:

This also gives some idea: 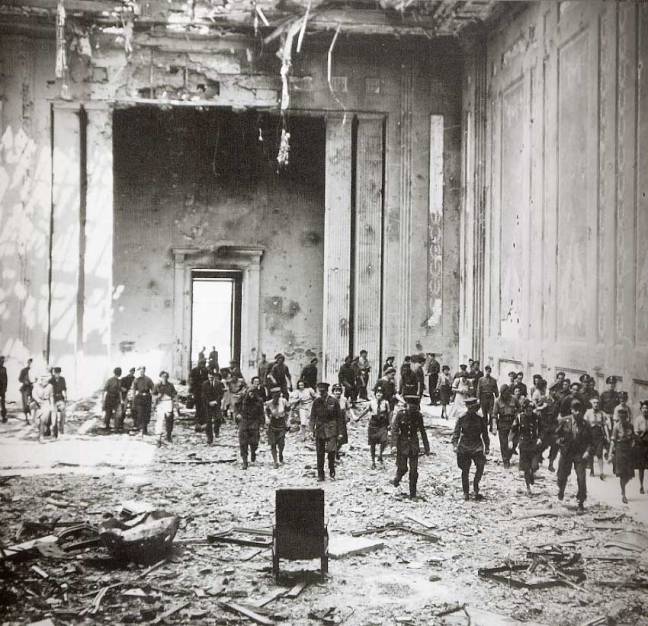 The Mosaic Hall was the setting for the major Nazi funerals, specifically those of Reinhard Heydrich, Hans-Valentin Hube and Fritz Todt among others. Here’s Heydrich’s funeral:

…and here’s Hans-Valentin Hube’s (Hube was a  general who had been awarded the Knight’s Cross with Swords and Diamonds – the highest award you could get in the Third Reich if you don’t count Goring’s stupid decorations – on Hitler’s birthday, 1944, and who was killed in a plane crash the next day in Salzburg).

Both Heydrich and Hube – and Fritz Todt for that matter – were buried in the Invaliden Friedhof which will will get to eventually:

So this is where you have arrived, having entered from Wilhelmstrasse:

From the Mosaic Hall you enter the Runder Saal (that’s the round room at which the arrow is pointing): it was circular to reorient the visitor’s direction from the bizarre bend in Voss-Strasse caused by the Borsig Palace. Here it is in its heyday: 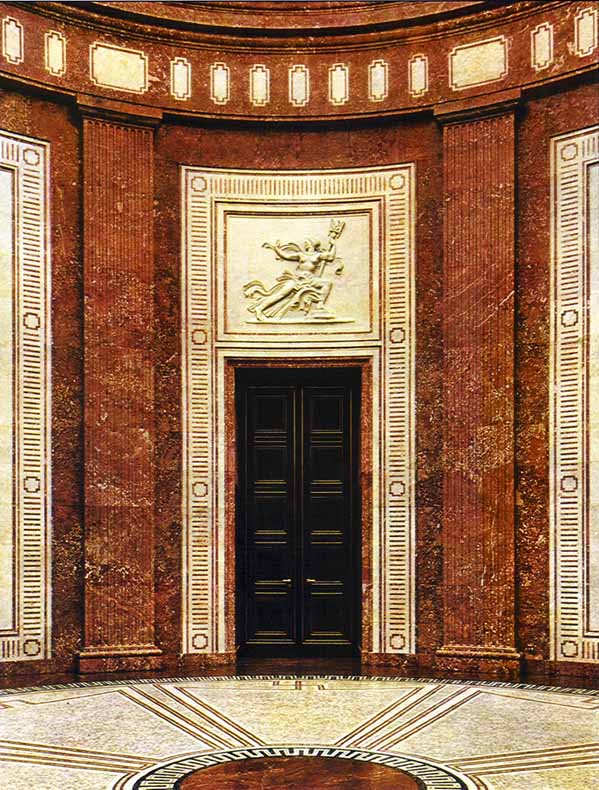 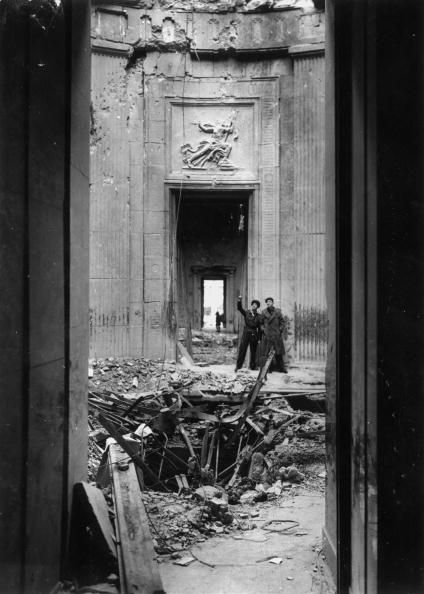 A walk through the doorway shown in the three photos above leads us on into the Marble Gallery … and here it is:

This room/hallway was 146 metres long, i.e. almost 30 metres longer than the longest of official soccer fields, and 12 metres wide. The floor is of highly polished Saalburg marble and the doorways are of a deeper marble which (from memory) was called Deutschrot. On the left (Voss-Strasse) side are 19 windows, each 6 metres high and set back a little over two metres from the Marmorgalerie (may as well improve your German while you’re here):

On the right are five doorways , the middle one is Hitler’s. Believe it or not there is a huge pile of crap on the Internet, particularly in regards to subjects like this. You will see the far door (at the end of the Marmorgalerie) described as Hitler’s office. Feel free to feel a superior indignation as I do at such tomfoolery. Feel free also to point out to your friends -although if you’re reading this it’s unlikely you have any – that the middle doorway is Hitler’s “as any fule kno” (Source: Nigel Molesworth). It must have been quite a sight in its day and quite an experience to walk down. For greater detail I would recommend the following three books:

The first two books are memoirs, Hoffmann’s is more academic. The first memoir, Rochus Misch’s, is an excellent read. He only died in 2013, still lived in Berlin and was apparently quite happy to discuss his time in the NRK. He narrates the poignant story of playing with the Goebbels children who called out “Misch, Misch, du bist ein Fisch!” (“Misch, you’re a fish!).  It must have been very traumatic for him to see their eventual fates. He also gives an interesting insight into life in the NRK, especially in The Bunker where he was probably the second-last to leave. Traudl Junge’s book is also good as she talks of Hitler’s treatment of his staff on a personal level, for example he personally offered condolences at the death of her husband and preferred to eat his meals with his (female) staff when he could. The final chapters cover her very real (to me at least) disillusionment with Hitler and I believe her feelings of guilt were real as she often says that she can’t believe how gullible and selfish she was. Like Speer at the murder of Herbert von Bose, she turned a blind eye. Peter Hoffmann’s book is a cracker although it becomes a little technical in places. The anecdotes,however, are great: he quotes Hitler as complaining about the chance of assassination from across Wilhelm-Strasse with the words “An assassin with a gun could shoot me or any other idiot from across the street ..” (quotation not exact, I’m too lazy to look it up but that’s the gist of it.) And one of the Chancellory staff had the unenviable job of ringing up Sepp Dietrich at the Lichterfelde barracks to complain that some of the SS guards were spending their guard duty time riding up and down the elevators or putting their faces up against the glass windows during briefings.

Here’s a view of the Marmorgalerie looking east (i.e. towards Wilhelmstrasse):

…and a night shot closer to the door, showing the furnishings and wall sconces:

This is where you currently are, viz. outside Hitler’s office (where the red line ends). If you are Emil Hacha, President of Czechoslovakia, history will not be kind to you:

It was in this office on March 15, 1939, that Hacha was forced to cede his country to the Nazis so if you are standing in this carpark: 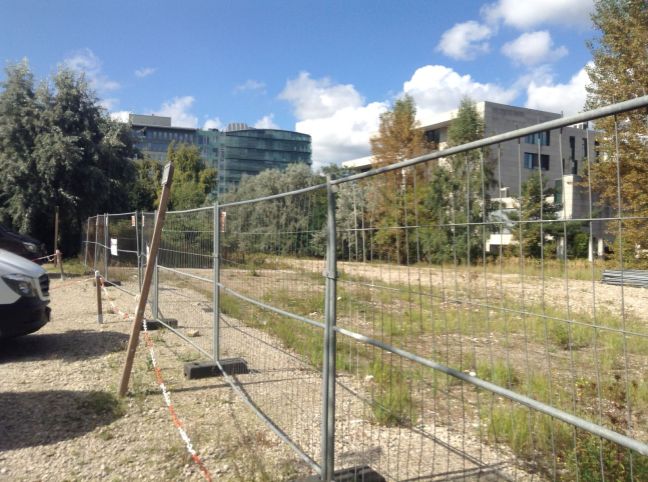 …just on the left-hand side of this fence (by my reckoning), spare a thought for the old gentleman who had to hand his country over, was forced to collaborate and was then arrested after ‘liberation’ by the Russians and died or was murdered in prison two weeks after his arrest.  He is often described as being too old and in feeble health for the job of confronting Hitler, in fact here is a quotation from Wikipedia:

“According to some post-war historians, Hácha was not responsible for his actions, given his old age and failing mental faculties.”

Don’t believe everything you read on Wikipedia: “given his old age and failing mental faculties”? Give me a break – he was 67.

Here’s a little test. See if you can pick which of these was the President of Czechoslovakia and which was a high school teacher:

I rest my case.

OK, this post is getting too long. Time to move on …