The apartments am Brandenburger Tor (henceforth AaBT) stretch along a number of city blocks so it’s a bit of a chook raffle to see which one you get. I’ve always been lucky: the view out of the windows has always been sensational. But first let’s check out the rooms themselves. This is the larger variety.

Big woop I hear you say? This particular apartment in which I stayed in 2010 probably sleeps about six and fronted onto Behrenstrasse. Big woop again? Well the thing is you get to look out the window at all the rich people staying at the Adlon if you’re of the stickybeak persuasion and let’s face it – who isn’t? Remember, the Adlon is where the Queen stays whenever she jets into Berlin to do Queen stuff. Also, the occasional pop singer will wave his microchild out the window if you – unlike the child – are lucky. If you Google the Adlon you will find a whole list of famous people who have stayed there but this is my favourite fact about the Adlon, courtesy of Wikipedia:

“After World War I and the abdication of the Kaiser, Lorenz Adlon remained a staunch monarchist and thus never imagined normal traffic would pass through the Brandenburg Gate’s central archway, which had been reserved for the Kaiser alone. He therefore never looked before crossing in front of it. Tragically, this resulted in Adlon being hit by a car in 1918 at that spot. Three years later, on April 7, 1921, he was again hit by a car at exactly the same spot, this time fatally.“

I taught a few slow learners in my time.

The Adlon fell on hard times after the war. The DDR/Soviets were in no hurry to rebuild such a symbol of western luxury/decadence:

But eventually some progress was made and the surviving wing of the Adlon eventually resumed service albeit on a slightly scaled-down … um … scale. 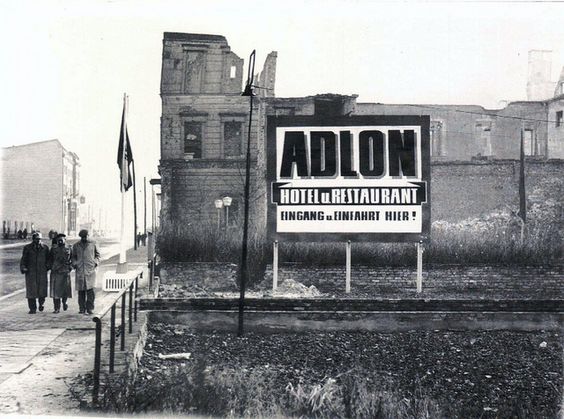 Now there were some famous people staying in the Adlon when I was there in 2010. Actually, I suspect they are diplomats but famous or not they must be rich. 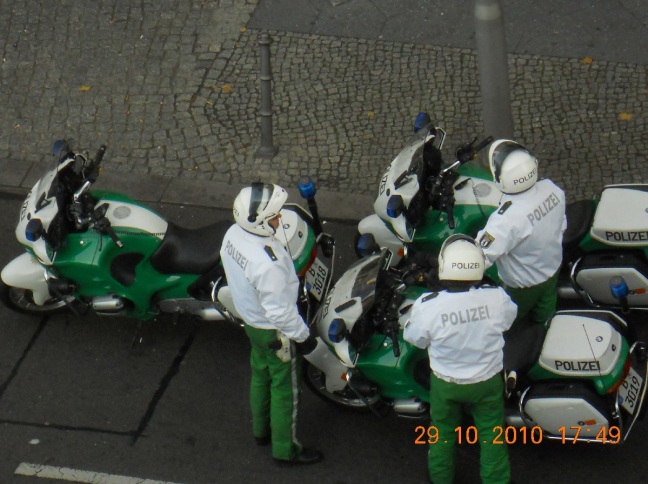 But then again I didn’t travel all that way to get shot.

Update: SBS (Australia) recently had a series called “Hotel Adlon” which charts the history of the hotel. It’s described as a “Familiensaga”. Be warned: it is certainly a saga and for my money it concentrates too much on the Familien and not on the hotel itself. Some great period footage though …

On subsequent trips I haven’t had an apartment opposite the Adlon possibly because the wallopers spied me with a beer bottle in my hand. Nevertheless, I’ve always had a great view. Depends what you mean by a great view of course. In 2011, my apartment was on the corner of An der Kolonnade and Wilhelmstrasse, fifth floor, perhaps 300 metres down Wilhelmstrasse in the direction of Tempelhof. This was my view out of the window: 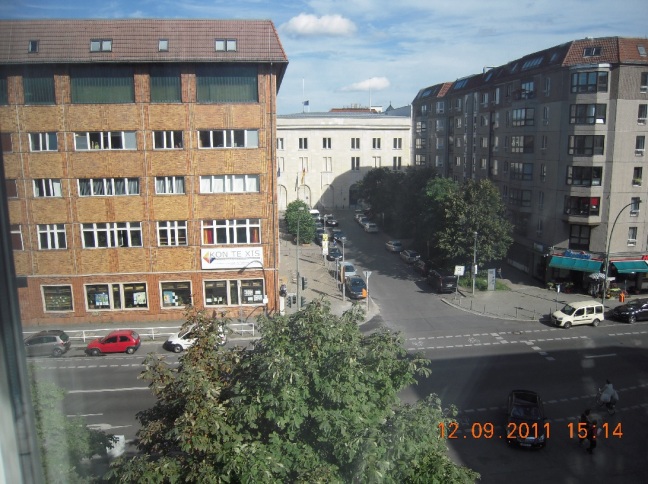 Still on the big-woop side, nicht wahr? (German for “Isn’t that so?”. Pronounced ‘nisht var’ rhymes with ‘jar’. Feel free to put it on the end of every sentence as you become more confident in speaking German. You will eventually make a fool of yourself but that’s half the fun, nicht wahr?) Well, see that light grey-ish building in the middle of the photo? That’s what’s left of Dr Paul Josef Goebbels’ Propaganda Ministry. It stretches behind that ugly DDR school building on the left but the wing which used to front onto Wilhelmstrasse was demolished by the DDR.

Here is the same building in ‘happier’ times. This is a fairly early photo as the Propaganda Ministry was remodelled at some later stage (the curved doorway in the centre of the photo was replaced) and Hitler is taking the salute from his car parked outside the Old Chancellery, his balcony presumably not having been built at that stage. 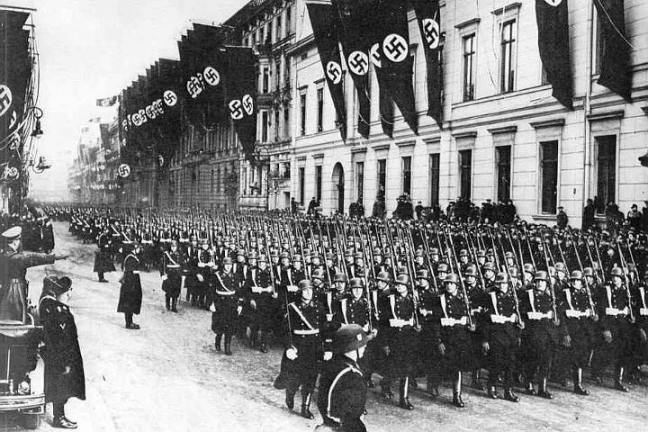 In the above photo, Hitler could probably have hit a sand wedge from his balcony onto the balcony of the Propaganda Ministry had he so desired. In the photo below, his (obscured) balcony is indicated by a red arrow while the balcony of the Propaganda Ministry is to the right centre of the photograph. Compare this photo with the demolition shot of the same building (above) – the wall with all the flags on it on the right-hand side of Wilhelmstrasse is the one being demolished 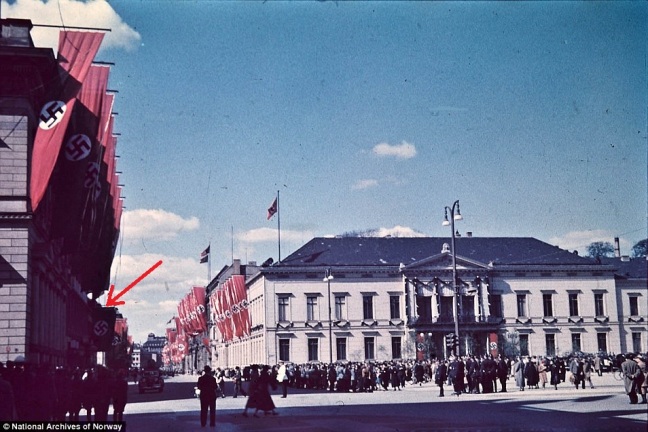 And here is the right-hand side of the Propaganda Ministry.

There was an exhibition (see notice above door) when I took this photo (no entrance fee) and I got inside but as I said they were very poogly about photographs. 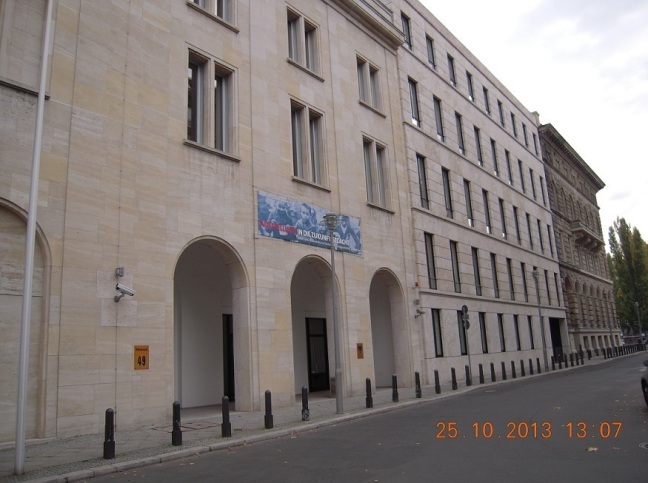 And the left-hand side:

The photo above, taken in 1949, shows the same three open doorways as in the other photos above and the three ‘closed ones. The wings to the left of these doorways are still there today. You can walk behind the ugly school building to see them but you can’t access them. The Wilhelmplatz was renamed Thalmannplatz by the DDR in honour of the prewar leader of the Communist party. The small railway in the foreground was there to aid demolition of bomb and shell-ruined buildings, especially the Borsig Palace and Reich Chancellery. And here is a view of the Wilhelmplatz when it was still the Wilhelmplatz. The red arrow indicates the surviving ‘open’ doorways and the large corner building in the centre of the photo also survives and will loom large in our narrative if I ever get around to completing it. 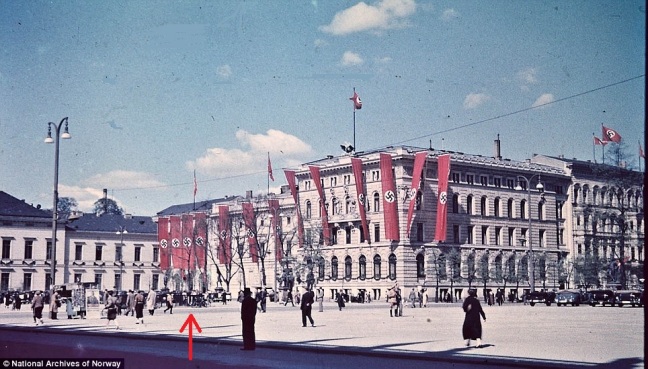 So that’s what you see – or what you would’ve seen prewar – if you look out your window on Wilhelmstrasse.