I probably shouldn’t advertise the positives of staying at the Apartments am Brandenburger Tor as I may find myself unable to procure a booking in future. So here is the bad-ish news. The apartments were built by the DDR government as ‘luxury’ apartments but be warned: by western standards they are not luxury. They are clean and comfortable but the plumbing – in my experience – hasn’t been brilliant and the washing machine is positively malevolent. The ones along the Wilhelmstrasse were also built hard up against the Berlin Wall in 1988-89. I read somewhere that they were built for DDR apparatchiks and this wouldn’t surprise me. Probably only hardcore party faithful could be trusted not to get a ladder up against the Wall and do the Harold Holt to the land of Big Macs and Starbucks. I doubt these apartments would have been made available to the DDR pole vaulting team.

BTW, the young women who work in the office speak perfect English. They will allow you to leave your luggage in the office area if your room’s not ready.
N.B. If you are driving do NOT park in the Adlon underground carpark while you check in to the Apartments am Brandenburger Tor. I did. It costs a lot. Trust me. Fifteen minutes cost about the same as a Manly ferry. Not a Manly ferry trip – a Manly ferry. There is a carpark between the office itself and the Jewish Memorial. Park briefly there (at the boom gate) and the office will give you a parking space.

Be warned that the rooms generally aren’t ready until at least 2:00pm on the day of check in. If you have time to kill I recommend a short walk to the Memorial to the Murdered Jews of Europe. Walk out of the AABT office, turn left and walk about 100 metres. You can enter the memorial itself or join a tour group. 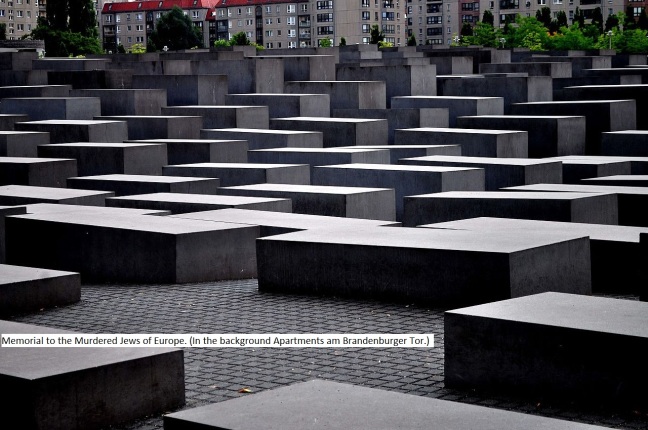 When the Memorial was being built the excavators discovered an air raid bunker under what had been Josef Goebbels’ villa. Here is some of the junk that was found therein. 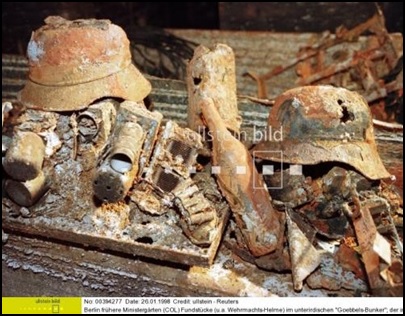 Goebbels’ villa stood roughly where Behrensstrasse joins Ebertstrasse (back in the day Behrensstrasse stopped where it joins Wilhelmstrasse, i.e. where the previously-mentioned Hitler Youth barricade had been.) 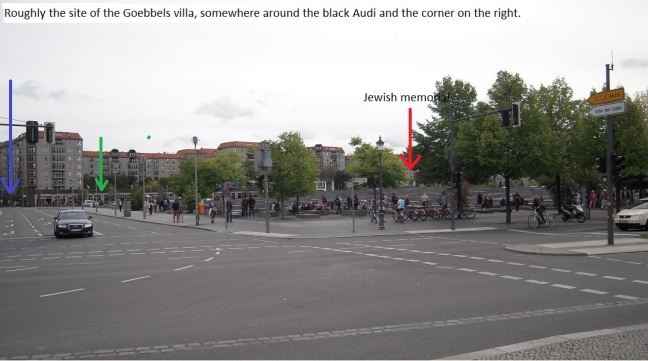 The blue arrow (above) indicates the offices of Apartments am Brandenburger Tor. The green arrow (around the corner) indicates the boardwalk ( Note: the boardwalk was demolished as of 2017) the red arrow indicates the Jewish Memorial. You can’t miss the Memorial: it takes up a whole block and is invariably swarming with tourists.This whole area from Ebertstrasse to Wilhelmstrasse was once the Ministry Gardens. This is where – in “Downfall” – Eva Braun smoked her cigarettes.

This may give you some idea of how big the Memorial is. In the top left-hand corner you can see the Reichstag and the Brandenburg Gate. Notice that the US Embassy has not been completed in this 2005 photo, nor has the tourist boardwalk to the right of the Memorial. 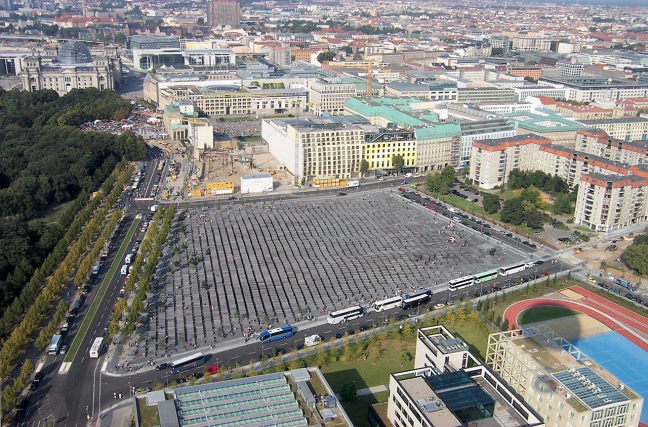 This is the original position of Goebbels’ villa, next to the US embassy. Note the urn-type decoration on the wall surrounding the Ministry Gardens. The red arrow indicates the villa, the green circle shows the urn/wall: 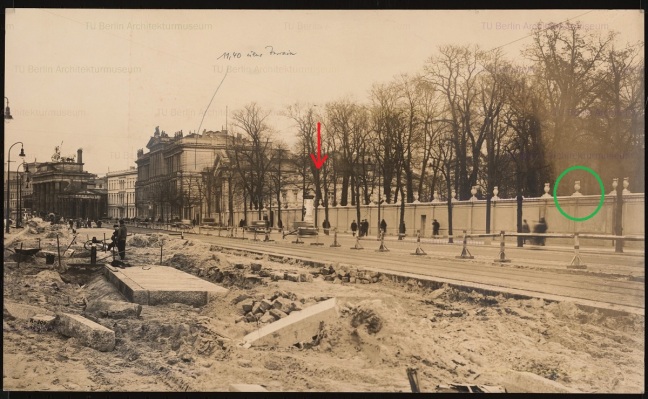 Another (similar) shot. This time the Russki tanks roll down soon-to-be-renamed Hermann-Goring- strasse: 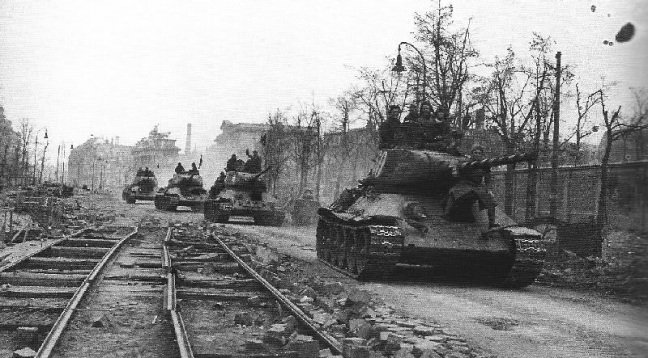 And here is a comparison photo I coincidentally took in 2011: 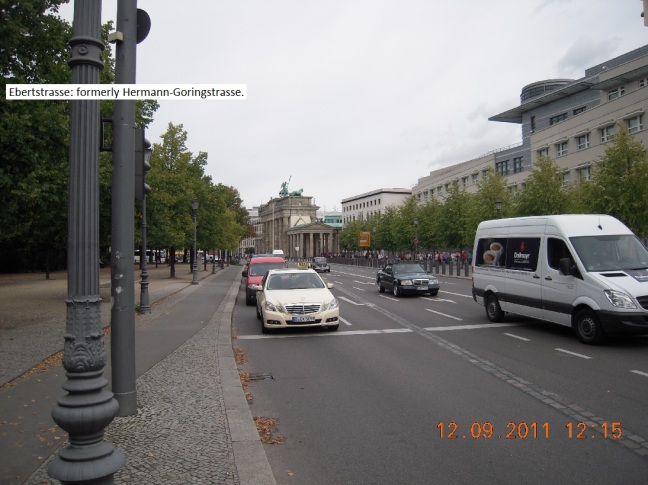 And here is the US Embassy and the Goebbels villa (right) at the end of the war: 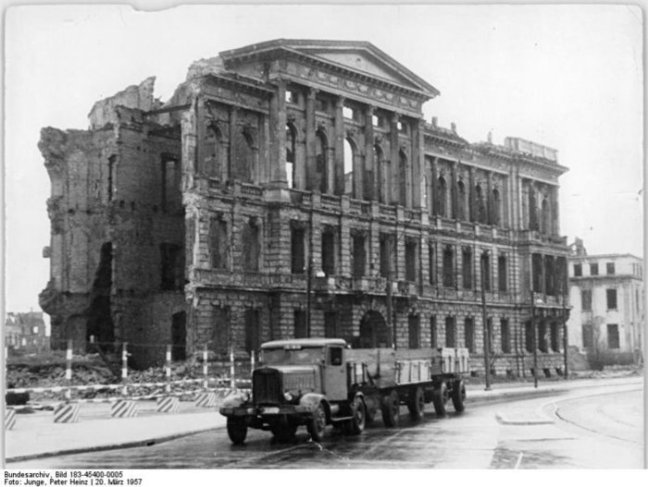 Here is the villa in 1945. If you don’t believe it’s the same building, check the urn decoration and wall in the TU Berlin Architektmuseum photo above. 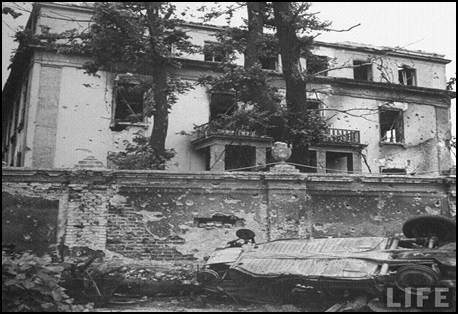 There is a spirited discussion about this villa here: http://forum.axishistory.com/viewtopic.php?f=44&t=154588&hilit=Goebbels+villa

If you don’t want to do the Memorial tour – or if it’s too busy – you can relax on the boardwalk which faces the Memorial. This used to be a nice, friendly area in which several eateries and tourist shops shared a common boulevard/boardwalk but as of 2015 each shop has put up walls turning the whole thing into a series of boxes. Pity. Also you can get a variety of beers here including (strangely) Paulaner which is a Bavarian beer (highly recommended to beer aficianados such as John Cleese and me). And you’ll always have company: 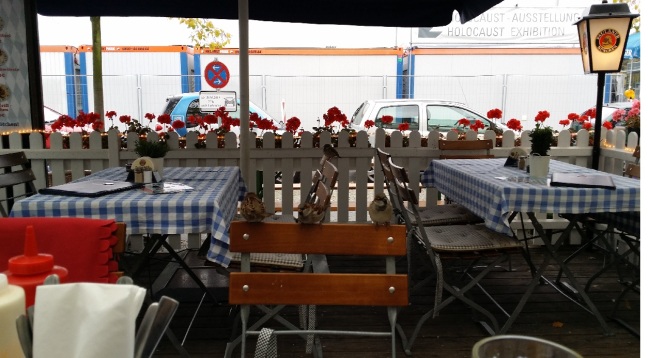 If you can’t see the company in the above photo, have a closer look: 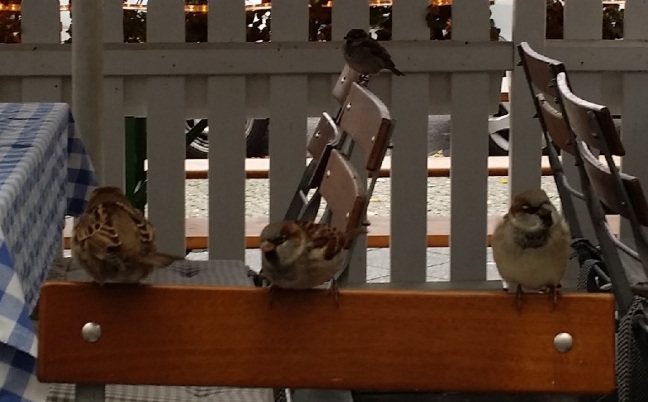 And here’s the boardwalk before the border disputes which turned it into a Lego set: 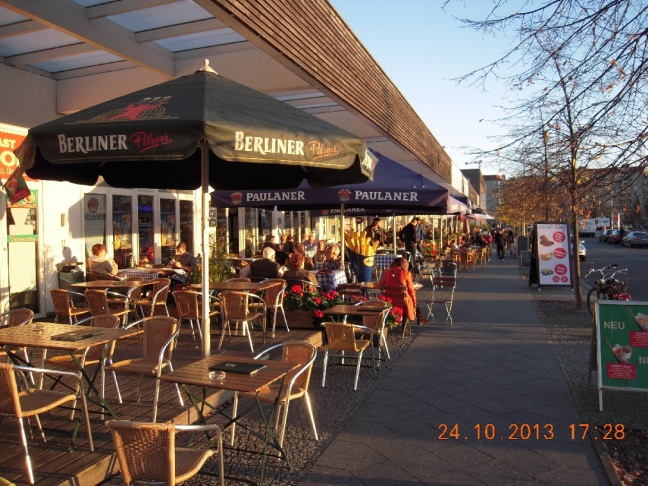 It doesn’t get much better: 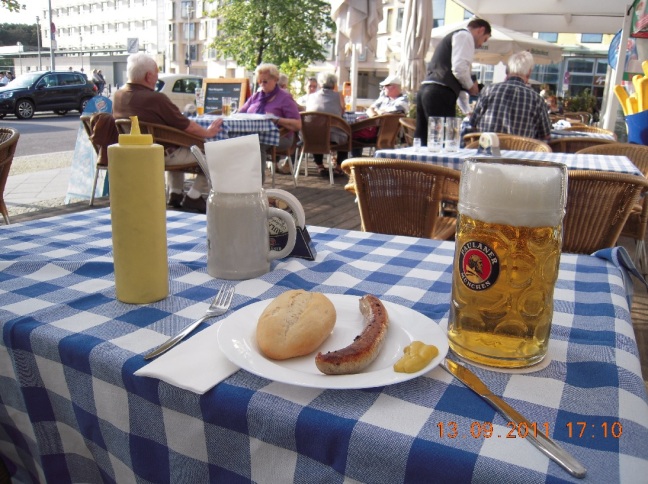 Sadly you can disregard everything written in blue above as I discovered on my return to this site in 2017 that the boardwalk had been completely demolished, as had the entire block on the left-hand side of Wilhelmstrasse (in the direction of Tempelhof). I am not going to delete the section though as it brings back fond memories of the beer and wurst and I like sparrows.