Short answer: not much. As I have indicated before, the surviving unbuilt-upon area is shrinking. I first photographed the area (i.e. Voss-Strasse) in 2010, at least when I was walking on it. I had photographed it earlier, for the first time I think in c. 1978/9 when we were obliged to look over the Berlin Wall courtesy of a viewing platform, access to which the poor buggers on the eastern side were denied (unless you were a bigwig with lots of medals and/or money). Here JFK looks over the Wall (he would be dead almost exactly five months later).

There were viewing platforms at various places all along the western side of the Wall. If you stood on top of the one at the Brandenburg Gate and looked to your right you would see this:

OK, the photo was taken in 1991. So sue me. But it is the same area that was presented to us tourists back in the 1970s. The NRK is completely gone and if you draw a line directly down from the Alexanderplatz Tower (middle centre) you’ll see a small hill. The guides told us that was where Hitler’s bunker was. I suspect that they were only regurgitating either Party instructions or local lore but, IMO, they were wrong. Anyway, that rubbish road on the middle-right is Voss-Strasse and you can make out the branch of the Transport Ministry still standing as it does to this very day at further mid-right. And here’s how you might see it if you were Doctor Who:

The tour guides were wrong – or were being deliberately deceptive, for the same reason that the red marble in the Mohnrenstrasse U Bahn station came from Thuringia (if you get what I mean…) 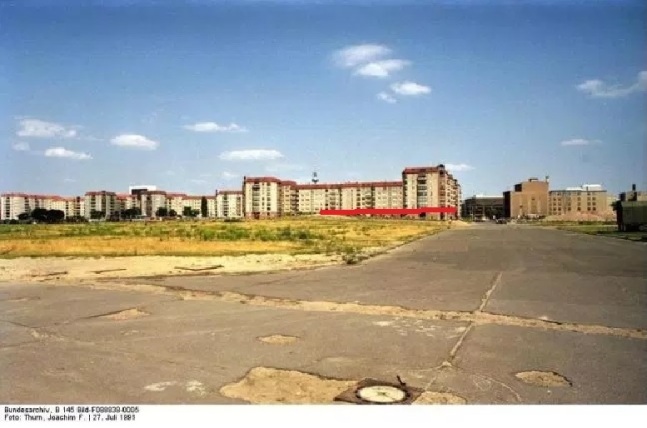 Not very clear but the red line in the photo on the left shows the placement of the “hump”, i.e. Hitler’s bunker, and the distance to Voss-Strasse. The red circle in this Google Earth photo shows the same placement and distance. 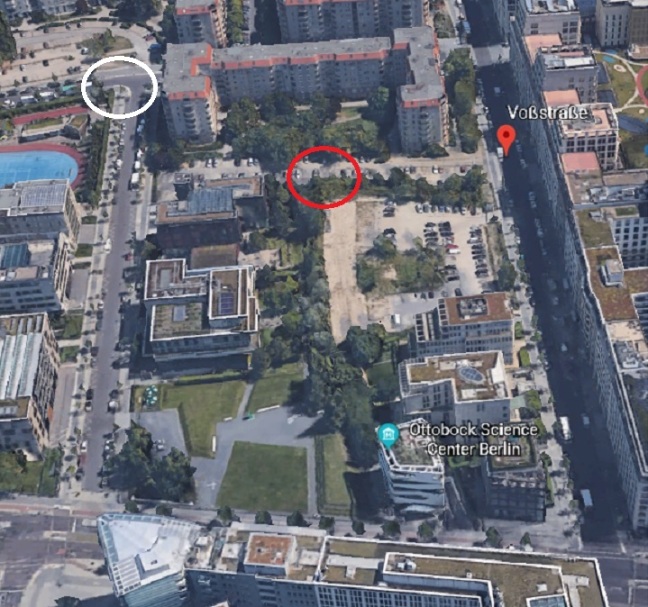 However, we now know – or believe (and I trust those more knowledgeable than I am) – that the bodies of Mr and Mrs Hitler were burned on the corner of Gertud-Kolmar-Strasse and In den Ministergarten (white circle). So the ‘hump’ that the guides told us was the position of the bunker was in fact in front of the wrong block of flats and was way too far to the right. So the tour guide chappies were ill-informed. Or they lied.

Have a look at this excellent footage from Youtube and you’ll see that the ‘hump’ is in front of the u-shaped block of flats (apartments to Americans) whereas the Transport Ministry (Number 33) is behind those flats (you can see what I mean in the opening 16 or so seconds but it’s all great footage):

I believe the ‘hump’ is in fact detritus from the demolition(sob!) of the NRK.

We now know where everything stood on Voss-Strasse. But what can you still find?

Answer: apart from the Ministry of Transport building on the southern side, nothing. The following photos – some of which were posted in miniature before – show the accessible, bare ground on which you could walk in 2011. Most of this ground was previously occupied by the NRK and is, as I’ve pointed out before, rapidly being built upon. This aerial shot shows the general area (red rectangle) where the following bare patches stood/stand: 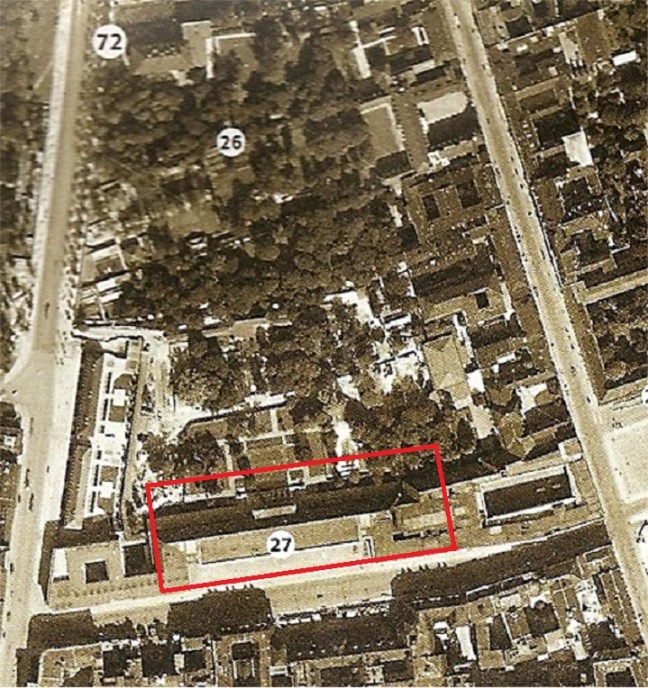 So, as Percy Bysshe Shelley once said – how come no-one’s called ‘Bysshe’ anymore? –

“My name is Ozymandias, King of Kings;
Look on my Works, ye Mighty, and despair!” 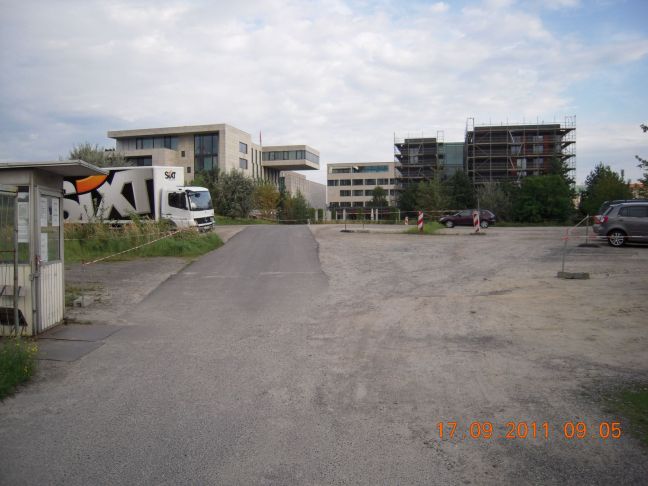 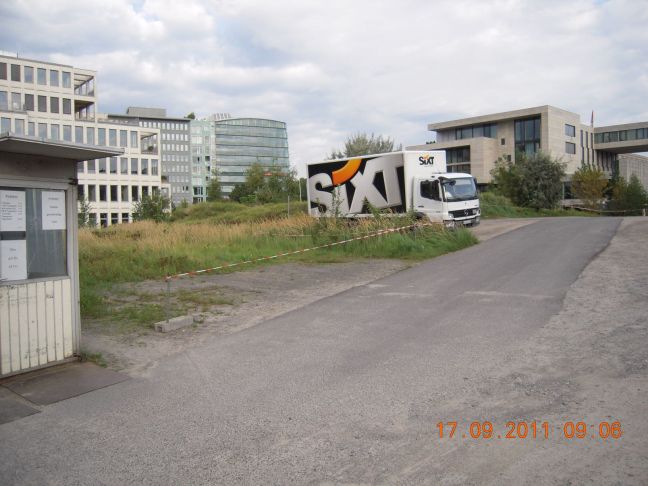 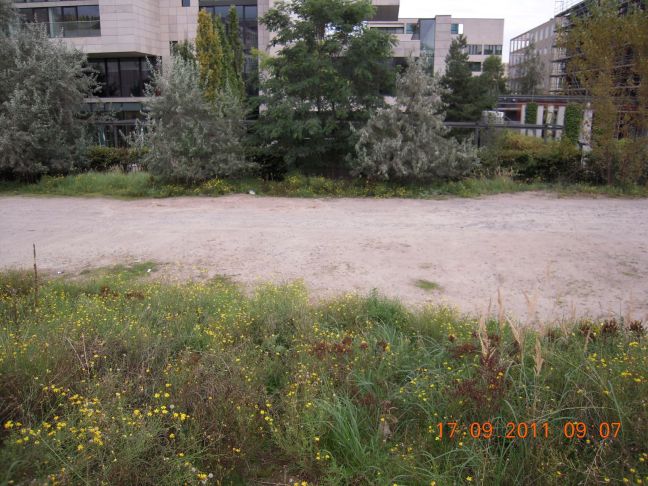 OK, so who can guess on which piece of currently (as of 2011) barren ground this much-published event took place? 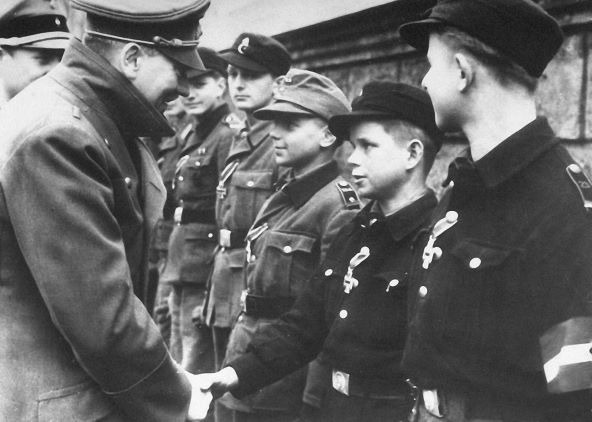 Answer in the next gripping instalment!