It should be noted that the three sections of the NRK were roughly the same length – around 100 metres, although by my reckoning the Mittelbau (Centre Section) is slightly longer than the other two.

So the West Wing (in yellow) was roughly 100 metres long and ended at the Mittelbau (in red) which was set back behind a balustrade from Voss-Strasse:

The East Wing is in orange and the two streets highlighted in green did not exist at the time of the NRK. The West Wing contained offices, a courtyard and a cafeteria for the office staff. It also contained the Great Reception Hall which we’ll look at when we get to the interior. Here’s what it looked like when it was new: 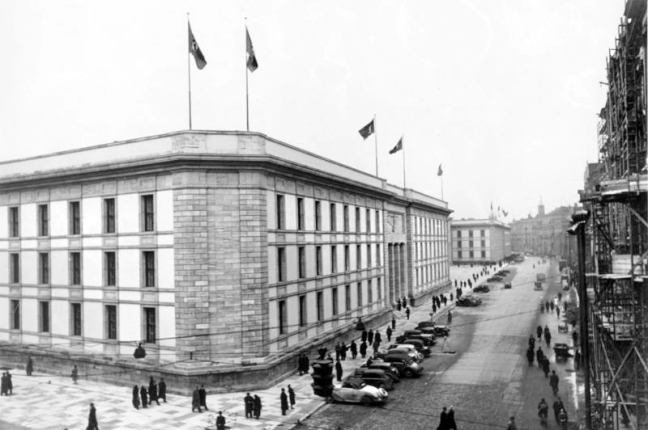 In the middle of the West Wing  above – where the 9 metre high columns are -was the entrance ( Voss-Strasse, Number 6):

So if you count out 50 metres from the corner you will be roughly where the entrance above stood.  This was roughly the spot when I took this photo in 2011:

The area is rapidly being built upon but some parts are still used as a car park, including the part where the Hitler Youth were decorated (more on that later). This entrance (Number 6) was roughly just past where the ugly box building ends:

Now when wandering around, gawking at where all this drama happened, it is well to consider the human cost. German casualties – military and civilian –  are estimated (by Wikipedia) at around 44,000 in the Berlin Defence Area. Russian casualty numbers are unknown and the estimates vary widely but they would have obviously been high. This young bloke is an example of the military casualties:

Go back to the image of the dead SS man, count the windows and you will find that the front of the wrecked vehicle behind which he lies is pretty much level with window six, which probably puts him some little distance before window eight, i.e. next to the entrance to the West Wing. The wider photo above must have been taken shortly after the fighting ended because the two wrecked beams circled appear just to the left of the red arrow in the dead SS photo. In the photo above, both corpse (presumably) and vehicle have been removed but the beams remain. When you get to the entrance of this building:

you will, by my reckoning, be standing fairly close to where this young man lay. BTW, the Russians did have a practice of positioning corpses after the battle to add some propaganda value to the photo however, IMO, the above photo is genuine. You might spare a thought for this young man who, like so many other Germans, Russians, French, Spaniards, Latvians etc died in this battle.

Note: there is some argument about how many combatants and how many nationalities fought in the Battle for Berlin. There is a sometimes acrimonious debate about the numbers here: https://forum.axishistory.com/viewtopic.php?f=51&t=73041

If you are particularly interested in foreign members of the Waffen SS, the best information, IMO, is here: http://www.bills-bunker.de/64090.html. Australian readers might wonder, as I did, if the families of the four Australians who served kept their photos in SS uniform on the mantelpiece. But for mine, this bloke is worth a Google, especially if your kids went to St Gregory’s Campbelltown:

https://en.wikipedia.org/wiki/Douglas_Berneville-Claye. There’s got to be a movie in that life …