Take a close look at the delicate tracery of the bridge. It won’t last.

Now why are you on this bridge and why is it historically important?

Answer: because this is the bridge the Soviets had to cross to attack the Reichstag.

Now walk across the bridge and look across to the Reichstag. You now have the same view as the Russians did after fighting their way pretty much all the way from Moscow, the difference being that now with all the cleaning up and rebuilding you wouldn’t know that a titanic struggle had taken place where you are now standing. This famous photo (below) shows the Russian tanks having just crossed the Moltke Bridge: 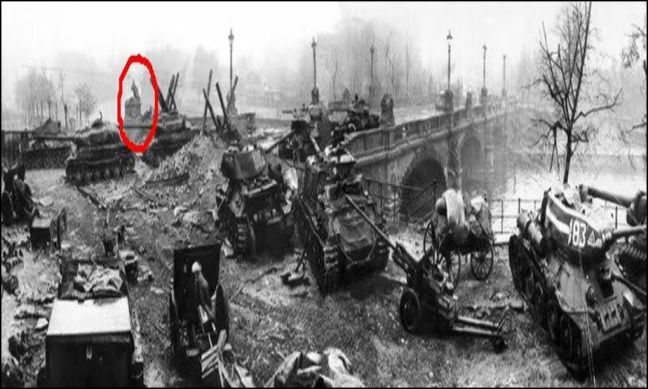 This is the same spot today:

This is the view the Russians would have had – more or less – minus the smoke, debris, fires and shattered buildings:

So near. Four hundred metres in fact. It would take them roughly two days to cross those 400 metres. See the stone griffin next to the grey-haired woman with the shoulder bag? These griffins are – not surprisingly – reproductions. The Germans take old photos of the originals, 3D scan them and then laser cut copies. The result is near perfect reproductions and this happens not only with statues but with some parts of buildings. The reason that some of the original statues on the roof of the Reichstag have not been reproduced is, I believe, because they were not solid. There are a number of (reproduced) stone figures around the roof edge of the Reichstag but the originals were stone or something similar.

The missing equestrian statues on top of the Reichstag (see next post) – which appear to be solid bronze castings – were in fact copper sheeting over a metal frame. See here: http://forum.axishistory.com/viewtopic.php?t=188004

So the Germans are putting almost everything back to the way it looked prewar. So what I hear you ask? Well it seems to me a shame that there is nothing to mark the deaths of so many thousands of young people not so long ago. If it takes a Russian army two days to cross 400 metres, you should be able to imagine the ferocity of the fighting. If you can’t,  consider this: the Germans blew the Moltke Bridge in April of 1945. One span partially collapsed but the Russians were able to force a crossing. Here is a photo I took – coincidentally from almost the same spot as the second (colour) photo above (the one with the three young girls in it):

This photo was taken around 1977/8 (the white sign indicates the end of the British sector – the Berlin Wall was around 250 metres to the right). Notice the damage (red arrows) still existing in 1977 from a battle fought thirty plus years before: the balustrade is completely gone as is the lamppost base above the white sign. And this was in the British (i.e. Western sector).

Now, how savage was the fighting? You will have noticed a red circle to the left in the photo of the Russian tanks. That circle indicates the remains of one of the griffins. Possibly this one:

And here he is in closeup:

Remember: he is real. He was there for just over fifty years when important things happened. His replacements are Johnny-Come-Latelies. Here are some more shots of the same griffin: 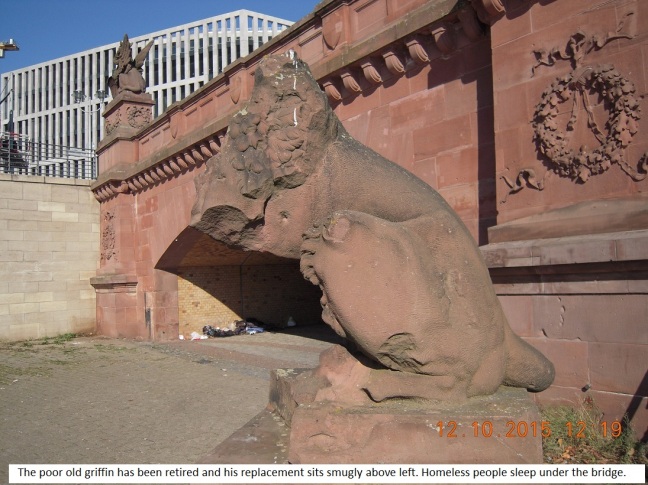